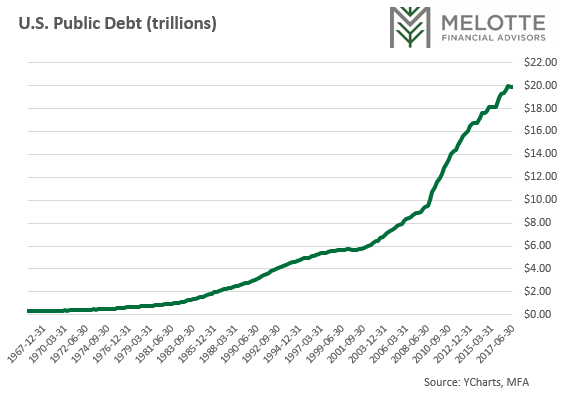 A quick google search reveals that the debt ceiling has been raised 74 times since 1962 and has never been lowered. It begs the question, “What’s the point? Why have a debt ceiling at all?” The debt ceiling appears to be more of a debt target.

Now there is talk of removing the debt ceiling altogether. Quite honestly, it’s a rational suggestion given the debt ceiling doesn’t mean anything anyway. The concern, however, is if we can rack up this much debt with a debt ceiling, what happens when we remove it? At least with even the symbolic debt ceiling, it forces the issue to the surface occasionally accompanied by conversation and some political embarrassment.

Interest on the Debt

Debt must be serviced by paying the interest. In FY2016, U.S. interest expense on the national debt was over $430 billion. Without even paying a dime of principal the U.S. Treasury pays almost half a trillion dollars in interest annually. Consider this is at a time when interest rates are near historic lows!

We would never be able to afford that as a nation. And that’s just the federal government’s share of debt. The total debt (government, household, business) in the U.S. is over $66 trillion. So it’s not just the interest on the national debt but interest on all the debt that must be paid. This implies that an ever-greater share of our national output will be allocated purely for paying interest on our debts. 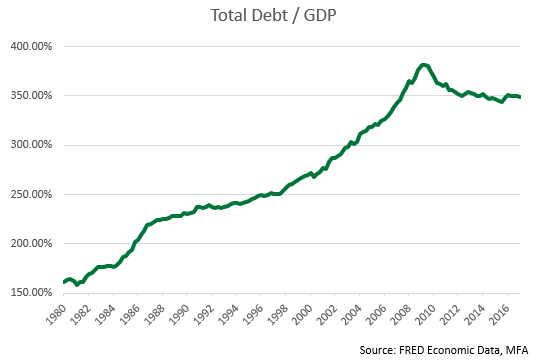 Compare 1980 to today’s debt load. The U.S. has embarked on a tremendous debt binge over the last 35 years.

In 1980, total debt to GDP was about 150%. Currently, this ratio stands at about 350% of GDP down slightly from a record of about 380% in the midst of the Great Recession. There is only so much debt that can be sustained by an economy. The limit is likely fluid based on a variety of factors, but it’s quite possible we’ve hit that peak and are now in a prolonged, deleveraging cycle, which will continue to drag on economic growth as it has done throughout this entire recovery.

Morality of the Debt

If debt is the money of slaves then we have enslaved ourselves, our children and our grandchildren.

Our founding fathers understood this very well, which is why it was so important to them that the federal government not run huge, perpetual deficits. The idea was that debt may be incurred in times of emergency (i.e. war) but would then be promptly paid off. The idea was not for a permanent, ever-growing public debt.

The U.S. population is approximately 320 million so each man, woman and child has about a $62,500 share of the national debt PLUS their own personal debt, which averages $40,000 per person. Additionally, total state and local debt is over $3 trillion, or another $9,500 per person. So total debt per person is about $112,000! This excludes debt owed by businesses.

Therefore, U.S. citizens are born on the hook for at least $72,000 of government debt (federal + municipal) of which they had absolutely no say!

If inflation (i.e. money-printing) is the preferred method of servicing the debt as opposed to direct taxation, then every American suffers from that stealth tax whether they pay income taxes or not with lower income folks feeling a greater burden.

Printing money, combined with higher taxes, are the most common “solutions” employed by irresponsible, reckless, profligate governments. This massive debt load we’ve taken on will cause our politicians to eventually increase revenues through greater taxation as well as more money printing because politicians prefer those two solutions over spending cuts and outright default.

What Does it Mean For You?

The solution is to make sure you have a diverse mix of assets. In addition to traditional bond and stock assets, ensure you have enough cash reserves to cover a few years’ worth of expenses to insulate yourself from short-term volatility of the markets. Additionally, maintain some inflation-protection in the form of real estate and precious metals. Think of it like a barbell approach where your traditional assets are complimented with cash at one extreme and precious metals and real estate at the other extreme. The exact mix of all these assets, of course, is dependent on factors unique to you and your family.

The mix you employ across your financial resources is likely the most important investment decision you can make so it is critical you consult an expert who understands the issues to help shape this decision.