Baby Boomers and the Silent Generation enjoyed a wonderful investing era as they were hitting their career stride, and investing the bulk of their retirement savings, throughout the 1980s and 1990s. Contrast that to Millennials who may be hitting their stride now and starting to put decent money away. It’s really a stark contrast in the market environment between the two eras.

Below is a quick graphic comparing stock market valuations and total debt load within the U.S. economy between 1980 and 2020. The differences are obvious and significant. I’ll summarize below the graphic. 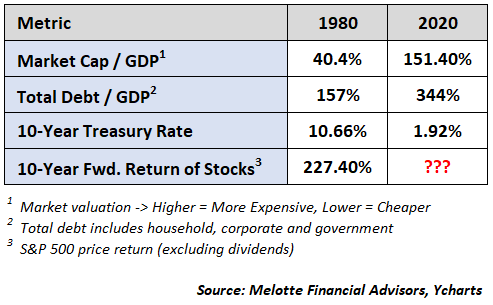 Market valuations in the early-1980s were extremely low. In fact, in 1982 valuations were the second lowest they’ve ever been behind only the valuations at the outbreak of World War II. Additionally, the total debt load within the U.S. economy (including government, household and corporate debt) was extremely low at only 157%.

Contrast those valuations and debt to today’s economy. U.S. stock market valuations are as, or more, extreme than ever before including 1929 and 2000. Specifically, the market cap / GDP (Warren Buffett’s favorite valuation metric) is about 150% as opposed to just 40% in 1980. This means today’s market is over three times as expensive as 1980! Our current total debt load as a percentage of GDP is about as high as it’s ever been at 344% compared to just 157% in 1980.

So, are prospective returns for the next ten years likely to be anywhere near as robust as the 1980s or 1990s? No, it’s highly unlikely.

The early-1980s was the perfect setup for a long-term secular bull market. In other words, the early-80s were characterized by cheap assets, low debt, high savings and high interest rates whereas today’s economy is characterized by expensive assets, high debt, low savings and low interest rates. 2020 is the anti-1980. Furthermore, all you had to do in 1980 was buy a 10-year Treasury bond and you would have made over 10% a year for ten years! If you bought that same bond on 12/31/2019 you’d earn just 1.9% per year.

For younger people, this is not your parents’ stock market that you’ve read about in your finance classes or on financial media that often assumes an unquestioned 10% average annual return.

For retired/retiring folks, you likely benefited from one of the greatest bull markets in history, but it may be prudent to take some risk off the table if history is any guide (everyone’s unique circumstances are different of course). It may be hard to do so as stocks have treated you so well for so long, but this is a very different market than those decades that provided incredible returns in the past. It’s also prudent to assume lower-than-average returns for the next ten years within your financial projections so that you’re not making the most important financial decisions based on unrealistic assumptions.

Let me know if I can help you or anybody you know.