In a game of Jenga, the tower of blocks is stable at the beginning of the game. It takes a relatively large shock, like someone outright knocking the tower over with their hand, to collapse the system. However, as the game goes on, the tower of blocks becomes more fragile. As each successive piece is removed, the system becomes exponentially more fragile so eventually only a very tiny stress is all that is needed to send the blocks crashing down to the table.

Don’t play Jenga? Okay, think of the energy that gets stored up in a forest that hasn’t had a fire for a long time. The dead stuff that is allowed to build up can act as kindling, which may eventually result in a massive, extremely hot, uncontrollable wild fire destroying millions of acres. This is one reason why forest management agencies employ controlled burning techniques.

Or think of snow building up on a mountainside that, for some reason, hasn’t yet had a small avalanche to release the stored-up energy. The stored energy gets greater the longer the system is allowed to build and, therefore, the greater the magnitude of the ultimate avalanche. It’s impossible to predict which snowflake will be the catalyst for the avalanche, but it doesn’t matter. All you need to understand is that the conditions are ripe for an avalanche, and that’s all the information you need to stay away. It doesn’t matter what the ultimate catalyst will be.

Or imagine two plates in the Earth’s crust along a fault line pressing against each other for decades. The force builds up storing potential energy. Eventually, the friction will give way releasing all that pent-up energy resulting in a devastating earthquake as the plates quiver upon release.

The concept of Antifragility is one I’ve learned from Nassim Taleb’s book, Antifragile: Things That Gain From Disorder. His book, lectures, and interviews are the source for much of the material that follows, which I have supplemented with my own ideas, applications, conclusions, and illustrations. However, Nassim’s work is much broader than what I discuss here as I am maintaining a very narrow focus in this commentary for sake of brevity.

Nassim Taleb said, “You can classify objects [or systems] in three categories; fragile, robust, antifragile.” As he says, “If you are fragile, you are disproportionately harmed by a large event than a small event.”

“Antifragility,” on the other hand, refers to something that becomes stronger or more valuable as greater stress is applied.

The longer a complex system (like the financial system) goes without a correction, the longer imbalances build up, the more severe the ultimate correction will be. That’s why it is counterproductive for governments and central banks around the world to constantly intervene in their markets as they attempt to micro-manage their respective economies. They create the conditions ripe for a massive economic avalanche because they are preventing the small “avalanches” that are needed to reset imbalances / release energy / reset risk along the way before the imbalances can become too large and threatening. Those small avalanches help build a stronger foundation and reduce fragility of the system.

Here’s an illustration of the fragility of the banking system used by Nassim Taleb:

Banking System leading up to Great Recession of 2008: 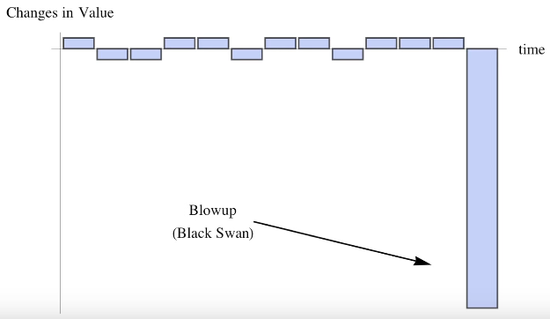 The illustration shows how fragile the banking system is (i.e. small gains with huge downside when stress is applied). The problem, besides the obvious, with the banking system being so fragile in today’s economic and political systems is that bankers made huge bonuses during the positives, but the losses got pushed onto the taxpayers. In other words, the bankers had (and have) no skin in the game. This is what many referred to as “privatized gains and socialized losses.” That doesn’t work. People need to have skin in the game otherwise the incentive is for extreme risk-taking, which makes the financial system even more fragile.

To illustrate the concept of having “skin in the game,” Mr. Taleb says, “An architect should be punished when the house crumbles on the owner because that removes the incentive to hide risk in the foundation. No inspector will know more than the architect.” This policy forces the architect to have skin in the game.

When you have skin in the game you manage risk much more carefully.

We are far better off if the system is allowed to have a bunch of tiny corrections than if we were to act like an overprotective mother who never lets anything happen to their child. We don’t want a helicopter government or a helicopter central bank. A robust (there’s that word again) economy needs failures. A robust economy requires creative destruction. Furthermore, when a correction begins we need to let it run its course instead of trying everything in our power to stop it so that the correction can get on with its work of wiping out the imbalances that have built up in the system. This makes the foundation of the entire system stronger going forward.

But we don’t let corrections run their course. Instead, we intervene in tremendous, unprecedented ways only to preserve the imbalances and sowing the seeds for the next major financial crisis that could be even larger.

A disease should be eradicated from the body and a recession is the market’s way of ridding itself of the disease. By intervening, we prevent the necessary healing process.

That’s why systemic risk, as huge as it was before the crisis, is even bigger today. The economy was never allowed to take its natural course and rid itself of the debt disease.