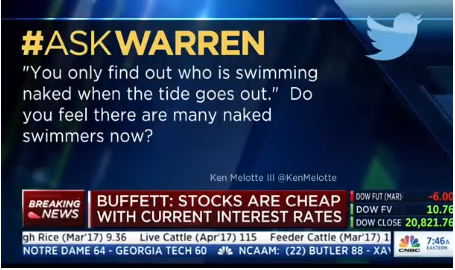 Back in February, CNBC interviewed Warren Buffett. For several weeks in advance the interview, CNBC asked viewers to submit questions via Twitter under the hashtag #AskWarren. I’m not sure how many questions were submitted, but they ended up choosing mine along with a few others.

This is pretty exciting for someone who knew from the age of 14 they wanted to be in finance and closely followed Warren Buffett, read his books, etc…

I’ve included a link to the video of the exchange below. This link will start the video at the point where my question was asked. You only need to listen for a couple minutes. Take a look. My question probably comes off as a little strange if you don’t know the context so, below the link, I explain the context of my question along with my response to his answer.

So what’s with the question? Well, my question is based off Warren’s own quote back in his 2001 Chairman’s Letter during the dot-com bubble burst. His quote specifically, “…you only find out who is swimming naked when the tide goes out.”

His answer to my question was a bit perplexing because in that same year, 2001, Buffett also proclaimed the following in a Fortune interview,

“[The market value of all publicly traded securities as a percentage of GNP] is probably the best single measure of where valuations stand at any given moment.”

He then goes on to say that…

“…nearly two years ago the ratio rose to an unprecedented level. That should have been a very strong warning signal.” [emphasis mine]

Well, if that ratio is “the single best measure of where valuations stand at any given moment” and the peak of this ratio in the late-90s “should have been a very strong warning signal” about a bubble, then why does he have so little concern about valuations today? After all, today this ratio is right about where it was at the height of the dot-com bubble. See below.

*chart illustrates Market Cap to GDP in lieu of GNP.

Furthermore, as I’ve expressed previously, the valuation of the median stock is far higher today (chart below from Dr. John Hussman) than it was during the dot-com bubble. This implies that excessive valuations are far more widespread today than they were in the dot-com bubble. Back then, the excesses were largely concentrated in technology/dot-com stocks.

Today, the excesses are in almost every sector including those stock sectors typically considered “safe” like utilities, blue chips and other high-dividend paying stocks. The reason for such pervasive extreme valuations is that record-low interest rates have incentivized  investors to chase yield wherever they could find it, which, thereby, pushed valuations of things even like utilities to extreme highs as well. So please don’t go thinking that because you have utilities and other high-dividend paying stocks in your portfolio that you’re insulated from the next correction.

It seems Warren is only worried about stock prices if interest rates were to rise dramatically. Sure, that could be the catalyst for the next major downturn, however, it’s not the only potential catalyst..

In regards to the relationship between interest rates and subsequent market returns, Dr. John Hussman recently wrote on March 6th in “The Most Broadly Overvalued Moment in Market History” weekly commentary:

“one does not need any information about interest rates at all to estimate the long-term return on that security. The price of the security and the cash flows are sufficient statistics to calculate that expected return. For example, if a security that promises to deliver a $100 cash flow in 10 years is priced at $82 today, we immediately know that the expected 10-year return is (100/82)^(1/10)-1 = 2%. Having estimated that 2% return, we can now compare it with competing returns on bonds, to judge whether we think it’s adequate, but no knowledge of interest rates is required to “adjust” the arithmetic.”

“The only thing that interest rates do at that point is to allow a comparison of the expected return that’s already baked in the cake with alternative returns available in the bond market.”

“When investors assert that stocks are ‘fairly valued relative to interest rates’…they seem to have in mind is that regardless of absolute valuation levels, stocks can be expected to achieve acceptably high returns as long as the S&P 500 forward operating earnings yield is higher than the 10-year Treasury yield.”

In that same commentary Dr. John Hussman asks, “Who are you, and what have you done with Warren Buffett?”

This material is for general information purposes only and does not constitute an offer to sell, or a solicitation of an offer to buy, any security. Ken Melotte may have positions in securities or investments mentioned in this publication, which may change at any time without notice. The information herein may include preliminary information and/or “forward-looking statements.” Due to numerous factors, actual events may differ substantially from those presented. Any opinions expressed herein are current only as of the time of writing and are subject to change at any time without notice.