As hard as it might be to believe, income tax rates in this country have at times exceeded 90%. And, perhaps even more surprisingly, the country was relatively prosperous during those same periods. Not so surprisingly, the high tax rates are often attributed with the widespread national prosperity. But we know correlation does not equal causation. Check out the tweet below for just one such recent example.

@ThomasEWoods @DrJillStein In the 50s and 60s, the top tax rate was over 90% ? Productive years, growth in industry, infrastructure, educ.

The insinuation by @gardeniabee being that the punitive tax rates of the period were directly responsible for the productive and prosperous 50s and 60s. But I’ve never been good at taking someone’s word for something so let’s see if we can find the truth for ourselves. On the face, it would seem that confiscation cannot lead to prosperity.

In the chart below I plotted the Highest Marginal Rates alongside the more meaningful Effective Tax Rates (1946 – 2015). 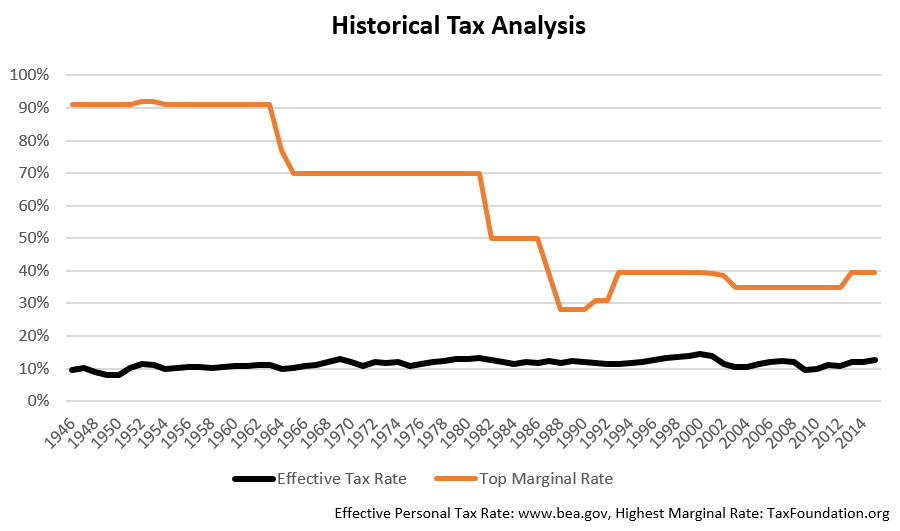 Of course, there are many more factors that influence economic growth than just tax rates, but we certainly cannot conclude with any level of certainty that the confiscatory levels of marginal tax rates in the 1950s and 1960s were responsible for widespread prosperity enjoyed.