A question I’ve received frequently the last couple months from many different people is about the potential for inflation given the unprecedented response to the Novel Coronavirus Pandemic. It is an important question because it impacts the best investment approach going forward as well as other personal finance decisions.

I understand the rationale behind the question. After all, trillions of dollars have been pledged between the Federal Reserve and the U.S. Treasury in the last few months in what essentially amounts to a “helicopter drop” of money on the economy. So, it is understandable that people are beginning to have concerns about the potential for inflation.

Ultimately, I believe we will get inflation mainly because the Federal Reserve will stop at almost nothing to make it happen, HOWEVER, we must allow for the possibility of getting deflation first.

Folks who are concerned about inflation see that the Federal Reserve is “printing” trillions of dollars. Fed Chairman Powell himself recently acknowledged the Fed is outright “printing” money or, rather, digitally creating it…

“We print it digitally. So we– you know, we– as a central bank, we have the ability to create money digitally and we do that by buying Treasury Bills or bonds or other government guaranteed securities. And that actually increases the money supply. We also print actual currency and we distribute that through the Federal Reserve banks.”

In fact, since the beginning of the year the Fed has flooded the system with almost $3 trillion! This is completely unprecedented in such a short time even during the Great Financial Crisis (GFC). 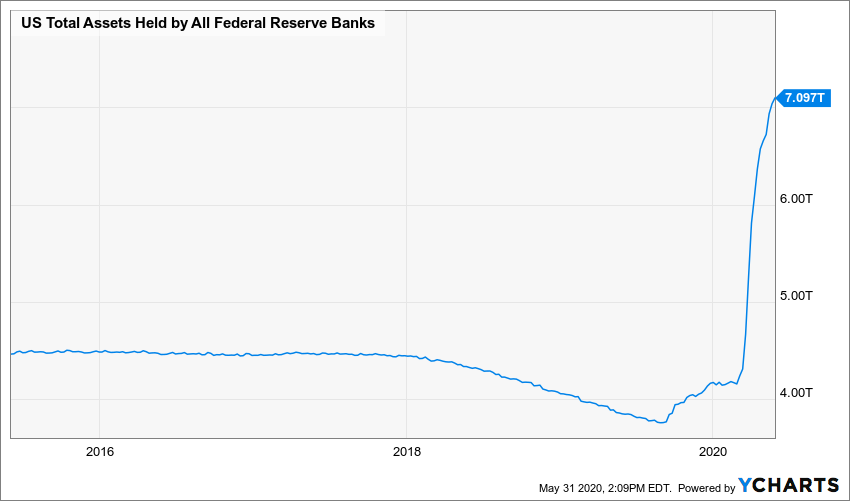 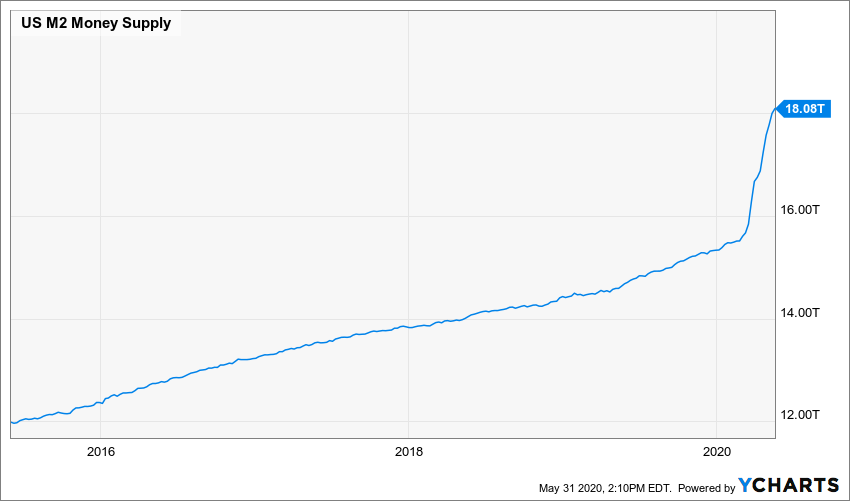 When a bank makes a loan, they are usually creating money out of thin air. Let me briefly explain that before we move on…

That $900 loan goes to a borrower who spends it on something so that $900 then gets deposited into the banking system. Now the total money supply is the original $1,000 “in your checking account” that you still maintain access to PLUS the new $900 that was created out of thin air via the loan for a total of $1,900 of spendable, on-demand money.

If households and businesses were to begin defaulting on their debts en masse, or if they simply slow down their rate of borrowing to a certain point, this could lead to a deleveraging cycle that reduces the total money supply and can actually exacerbate a global USD shortage. This would result in deflation even as the Fed is printing trillions to try and fill the “void.”

Oil (along with other important commodities) is priced in dollars, there is tens of trillions of U.S. dollar-denominated debt around the world and trillions of taxes are owed each year in U.S. dollars. All this results in an ongoing demand for U.S. dollars putting upward pressure on the price of USD.

Lastly, inflation can also be caused by a decline in confidence in the USD. For example, let’s say there is 20 trillion of USD around the world. If the market were to suddenly expect that the Federal Reserve was going to print up 20 trillion more over the next year to monetize corporate, government and household debts you might see a game of “hot potato” quickly ensue where everyone tries to get rid of their dollars as soon as they receive them to avoid holding a sharply depreciating asset for too long.

So, there are several different possibilities of how this plays out. Perhaps the Fed navigates this ship perfectly and there is no significant deflation or inflation at all. Or perhaps a cascade of defaults rip through the economy because of mandated lockdowns (and now mass rioting and looting) that impact economic activity causing the money supply to collapse leading to deflation and a global shortage of Dollars. Or maybe simply a shortage of dollars causes borrowers around the world pain as their debt becomes that much more expensive to repay (borrowers are inherently “short” the currency borrowed so appreciation of that currency makes the debt more expensive/harder to pay). Or perhaps there is a supply shock due to pandemic-related shutdowns. Or there could be some combination of these events.

Given the various scenarios and the historical extremes we’re finding ourselves in today, I’m employing a barbell approach within portfolios where traditional assets like stocks and bonds are complimented by U.S. Dollar futures (via an ETF) as a dollar shortage/deflation hedge on one end and precious metals as the monetary madness/inflation hedge on the other end of the barbell. This is also one reason why I recommend retirees / near-retirees have at least twelve months of expenses in cash and other short-term instruments.

Flashback: Remember that the Fed promised they would normalize policy and reduce their balance sheet after their unprecedented actions during the Great Financial Crisis. They assured us they were not permanently monetizing government debt as they increased their balance sheet to over $4 trillion from ~$800 billion. Yet, as several of us predicted, they were never able to normalize. They tried to normalize by raising interest rates and reducing their balance sheet a couple years ago, but that led to a sharp stock market decline and frozen credit markets (2018). That reaction then promptly caused the Fed to reverse course where they’ve pushed rates back down towards zero and almost doubled their balance sheet. They’ve never been able to normalize policy from the emergency measures undertaken during / following the Great Financial Crisis.

Precious metals may be an attractive asset over the next decade, which is why I own them in portfolios. However, we must also acknowledge the path is not always straight and could take a few turns before we get to the ultimate destination. Hence, the addition of the deflation hedge as well in the interim.