This morning we learned that the November employment report was tremendous! U.S. companies added over 260,000 jobs, which far exceeded expectations. This pushed the employment rate back down to 3.5% matching the low from earlier this year, which is the lowest since 1969.

There were some concerns about the potential for this report because the ADP employment report from Wednesday was so poor. That ADP report indicated private sector job growth of just 67,000 compared to the 157,000 expected.

The large discrepancy between the BLS report we received this morning and the ADP report from a couple days ago is very strange. Perhaps the truth lies somewhere between the two, but for now, the market appears to be taking the government BLS report at face value as the S&P 500 is up over 1.0% on the day at the moment.

Over the last couple weeks I provided you with two videos. There have been a couple developments since I released those.

In the second video I discussed total construction spending. Well, it turns out that particular metric has gotten worse. On December 3rd, we found out October’s construction spending report was worse than expected with a 0.8% decline while the consensus expectation was for a 0.4% increase. Additionally, the September figures were revised downward to -0.3% from +0.5%. This is the chart from the video (before recent updates) below showing year-over-year construction spending change (white line) and recessions shaded in red. 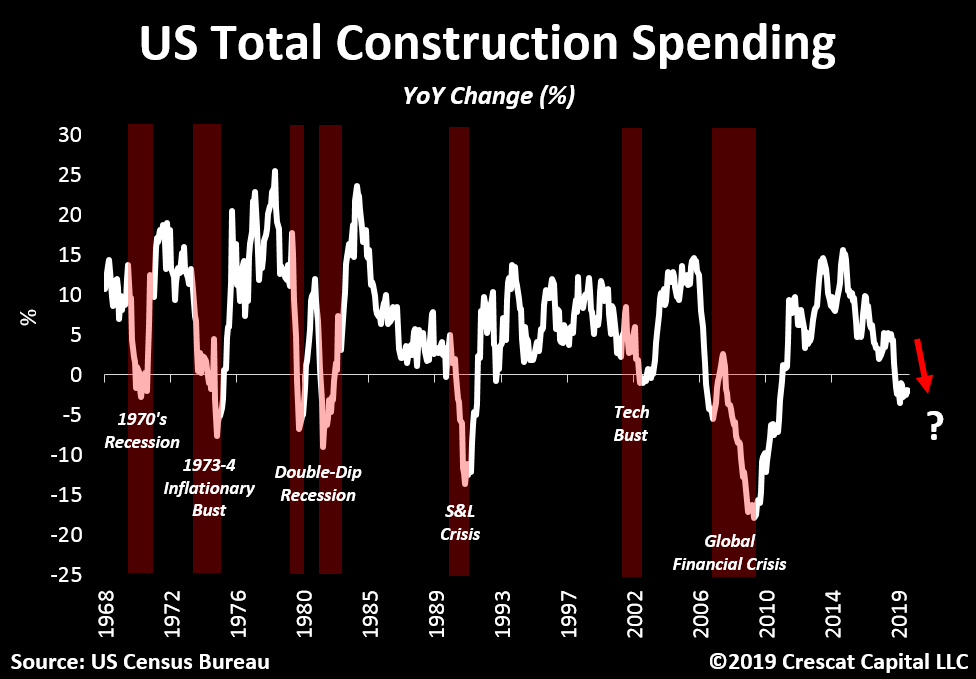 In the first video, I discussed market valuations and implications for returns going forward. As I stressed in the videos, market valuations are NOT reliable short-term indicators at all. However, I believe it’s important to monitor reliable valuation metrics to determine where the market sits in the context of history, to aid in building realistic financial projections, help make the best retirement decisions and help make the best investment strategy decisions in the context of those retirement goals.

In that first video I mentioned that U.S. bond yields and U.S. stock market valuations are such that the prospective returns for the next twelve years were the lowest in history EXCEPT for the one week at the top of the 1929 peak just before the Great Depression. However, that has since changed now as well. With the bump enjoyed by the market since the video’s release the prospective 12-year forward return of a domestic 60% stock / 40% bond portfolio is now lower than its ever been bar none. In other words, the estimated 12-year returns from here are lower than even at the peak of the Roaring Twenties before the Great Depression.

The good news is that:

Of course, the risk is that being relatively conservative now means potentially missing out on some returns in the short-term if the market continues to run higher. No doubt that’s been the case in 2019 while 2018 revealed the merits of the more conservative approach. The idea being that stocks can decline quite violently as we saw in the fourth quarter of last year, 2007-2009, 2000-2002, 1987, etc… Bear markets have the ability to erase 10-20+ years of stock market appreciation so the question is are we comfortable being a little more conservative, foregoing some appreciation in the short-term in order to preserve our financial independence / maintain retirement goals? Furthermore, if we’re taking a dynamic approach where we can adjust our allocations over time as opposed to a static approach we can potentially outperform over the full market cycle.

One last note about valuations, S&P 500 earnings are actually down for the year. That means this immense price appreciation in the S&P 500 has been entirely from valuation expansion as opposed to expanded profits. In other words, we’re simply paying much more for each dollar of earnings. The market is higher while the fundamentals are worse.