I speak a lot about U.S. stock market valuations because they are at historical extremes exceeding both the pre-Great Depression peak and the Dot-Com Bubble peak, however, today I wanted to focus on the labor market, specifically. It’s important we understand the progress that’s been made there.

From February to April the U.S. lost over 22 million jobs. This caused the official unemployment rate to skyrocket to almost 15% from 3.5%. There was a bit of a v-shaped bounce starting in April/May as some jobs were quickly regained. However, job growth has begun stalling.

At the moment, we’re still short about 10 million jobs from where we started this pandemic. For example, almost 3 million jobs were regained in May, almost 5 million in June but the rate has continued to slow through November where we added just 245,000 jobs. The shape of the curve looks eerily similar to a square root symbol, doesn’t it? 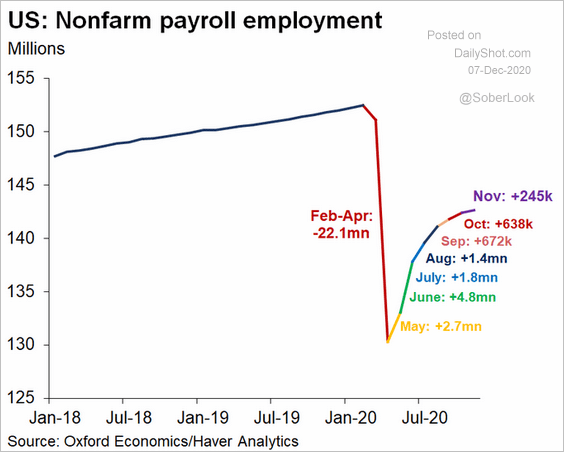 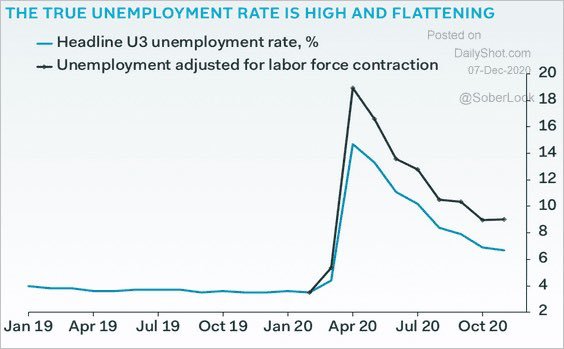 Looking at it another way, we see the employment to population ratio ended November at just 57.5%. That started the year at about 61% 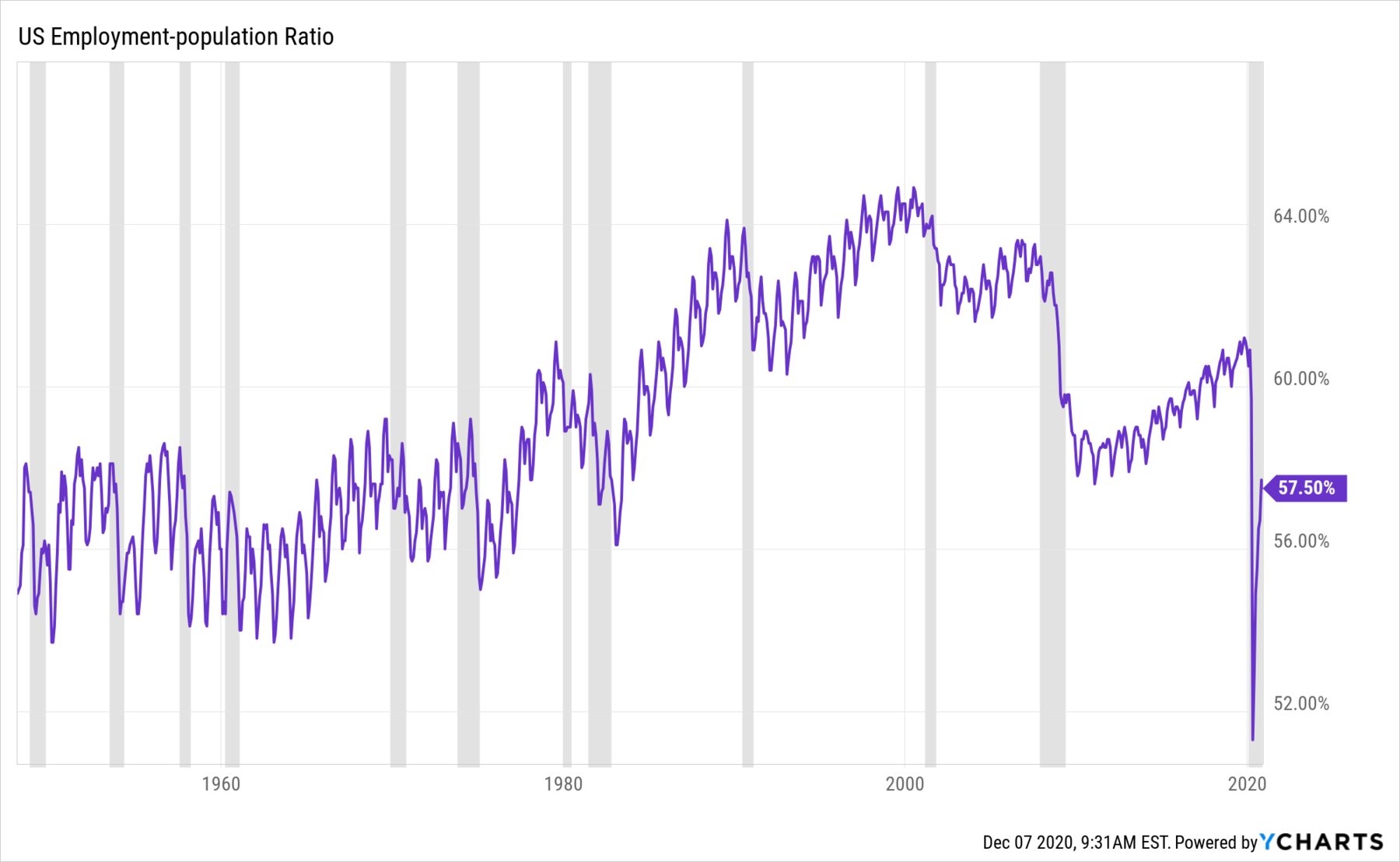 So, we notice the labor market is still a LONG way off from where we started this pandemic and job growth has slowed to a crawl relative to a few months ago.

It’s no surprise small businesses are hurting. Personally, I know many small business owners who are struggling tremendously. It’s extremely painful and heartbreaking to see. Either some businesses have been forced to shut down by politicians, or the environment simply isn’t conducive even though they’re technically allowed to remain open, or the habits of people have simply changed for now.

Families who have risked so much and were doing so well until 2020 are on the brink of losing it all if they haven’t already. Many have had to shut down their businesses because they simply can’t justify throwing more money to keep their businesses afloat for an indefinite period where there is no end in sight. 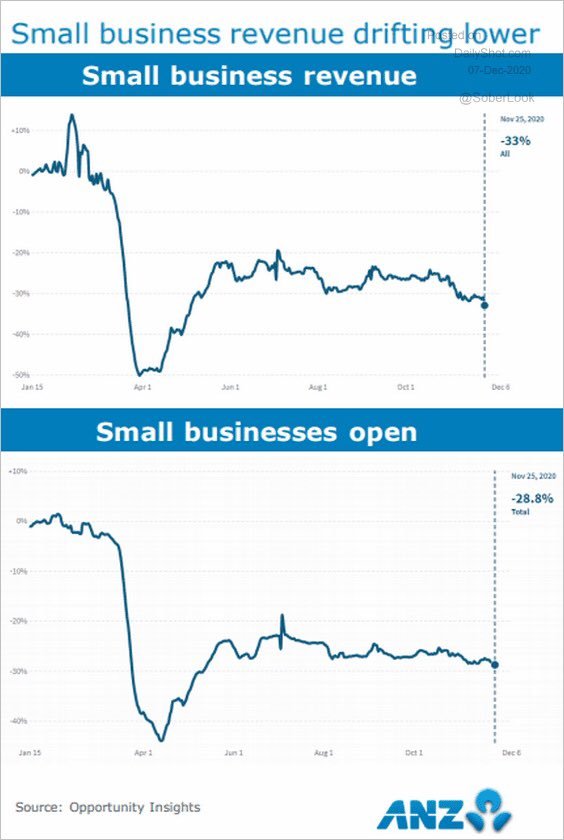 Having said that, we also know that the Federal Reserve is being extremely supportive of the market taking unprecedented action (printing 3 trillion dollars in just a few months), and that irrational manias can persist for much longer than we expect. However, the worst thing an investor, especially someone nearing retirement or early in retirement, can do is ignore the fundamentals and chase this higher.

Be patient. Be disciplined. I know the temptation to dive in is strong. However, there is a reason investors like Warren Buffett have been around for so long through so many cycles of bubbles and bursts. It’s not from chasing irrational manias higher and buying low quality assets at record valuations. It’s by being patient and disciplined by adhering to time-tested principles even when it’s not popular and when money is left on the table.

My guess he makes it up when the S&P resets to accurately reflect the underlying fundamentals and as he deploys dry powder in the depths of the next crisis by snagging up high quality assets at fire sale prices just as he did in 2009. 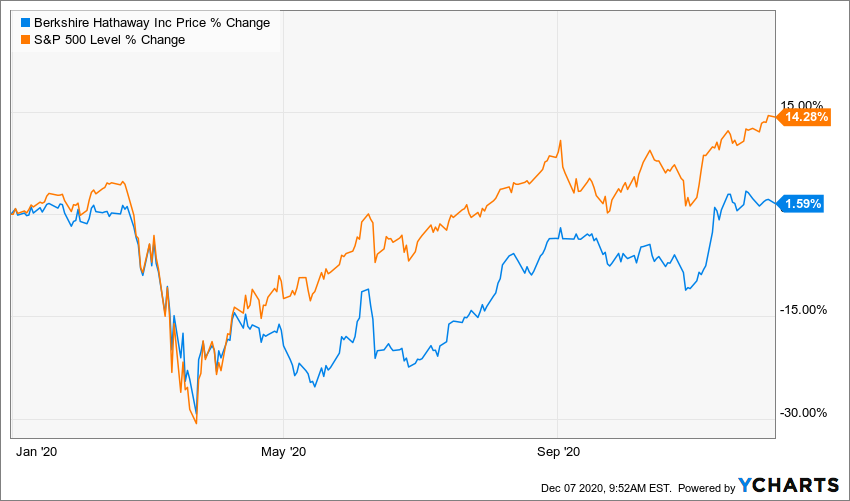