One of the more important questions I try to answer via the financial planning process is, “How much can I withdraw from my portfolio each year and not run out of money?” Or the inverse of that, which is, “How much do I need to have saved in order to retire and sustain my current lifestyle without running out of money?”

To answer the question specifically for your unique circumstances we would need to prepare custom financial projections, however, there are some general rules of thumb that can serve as a starting point.

The most widely-cited rule of thumb is the 4% safe withdrawal rate, which arose from the Trinity Study and, earlier, by Bengen. The 4% rule says that you should be able to safely pull 4% from the portfolio value in the first year and then adjust each year’s withdrawal by inflation thereafter (consumer price index) without running out of money during a 30-year retirement time horizon.

The rule assumes approximately 60% allocated to stocks during the 30-year retirement period with the remainder of the portfolio invested in Treasuries. Let’s explore this rule a bit further….

The Good, The Bad and the Ugly.

The Good
The 4% rule is actually a conservative floor. It’s calculated by finding the highest initial withdrawal rate that would have avoided drawing the portfolio down to zero prematurely before the end of a hypothetical 30-year retirement period. The study was performed on every rolling 30-year period starting with 1926 so it captured the Great Depression and Stagflationary 70s. It has since been updated and has worked through the Dot-Com Bubble Crash and Great Financial Crisis thus far. In other words, the 4% rule is driven by the worst case scenarios we have experienced in the U.S. over the last century.

In one of those 30-year cases, the 4% initial withdrawal rate just barely allowed the retiree to squeak by for 30 years without running out of money. That period was the 30-year period starting 1966. Why was that 30-year period so bad? Well, it included over a decade of low investment returns combined with high inflation (stagflation). The portfolio returns were low while the annual portfolio withdrawals were increasing rapidly due to high annual inflation. So that one period drives the rule for all periods to become the “safe withdrawal rate” or the rule of thumb widely used now. Of course, there is no guarantee that there won’t be a worse period similarly characterized by low investment returns and high inflation.

Much more often than not, however, we find that the retiree’s portfolio would have actually grown quite significantly by the end of the hypothetical 30-year period. In other words, we find the 4% rule usually ends up being too conservative and causes the retiree to miss out on some things they could have otherwise enjoyed. In fact, there were plenty of 30-year periods where a 5% or even 6% initial withdrawal would have worked very well.

The idea is that a better approach may be one that allows for spending to be increased over time if things are going well to allow the retiree to safely derive greater benefit from their assets or start with a higher withdrawal amount if the retiree could maintain the flexibility and discipline to reduce withdrawals when needed in the future (caveat: it’s very difficult to reduce lifestyle once your habits are grooved after many decades).

This is why I review financial projections with clients at least one time each year. By updating the projections each year we can proactively make adjustments to reduce the potential of running out of money prematurely while simultaneously getting more benefit from your portfolio throughout your retirement as well!

The Bad
Some words of caution (besides the fact that past performance is no guarantee of future results):

The Ugly
Above in “The Good” we see that the 4% rule is actually a conservative rule driven by the worst case scenarios from over the last century. We note that there were many 30-year periods where a higher initial withdrawal rate would have been perfectly acceptable. In most cases, the 4% rule is too conservative preventing people from enjoying all the benefits they could have enjoyed.

Additionally, the terminal value of the portfolio can vary WIDELY even between portfolios that experience the exact same average annual return!

Essentially, the concept of the sequence of returns is that the returns during the first decade of retirement have a tremendous impact on your “probability of success”, “safe” withdrawal rates, etc…

Unfortunately, there is no way to know for sure what returns and inflation will be over the next decade, however, we can potentially forecast ten-year returns with some accuracy and a relatively high degree of confidence.

But how do we determine if the market is expensive or cheap? Well, there are a few valuation metrics we can use that have ~90% correlations with subsequent 10-12 year market returns. See the chart below from Dr. John Hussman:

Here is the ugly news -> Current market valuations are at historical extremes. In some cases, market valuations are at all-time record highs exceeding even the Great Depression and Dot-Com Bubble peaks! This implies the next decade could provide the lowest 10-year returns for the U.S. stock market we’ve ever experienced. Far from an ideal situation for anyone just retiring or hoping to retire soon.

Below you’ll find a chart of one of the reliable valuation metrics listed above. Notice the valuations are now exceeding both the Great Depression AND the Dot-Com Bubble? 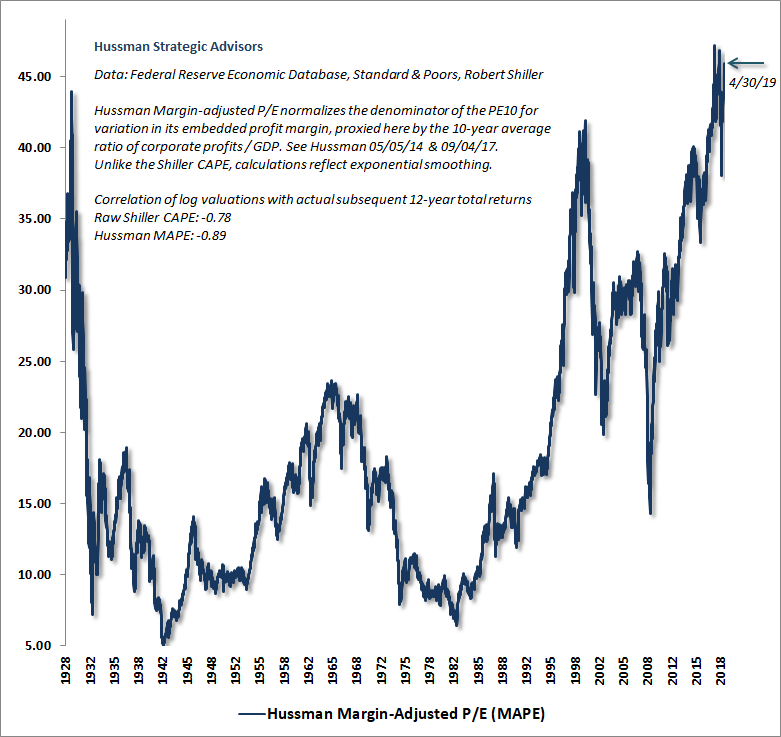 Therefore, returns over the next decade are projected to be very low (blue line is inverse of chart above and red line plots the projected annual returns for the next 12 years). 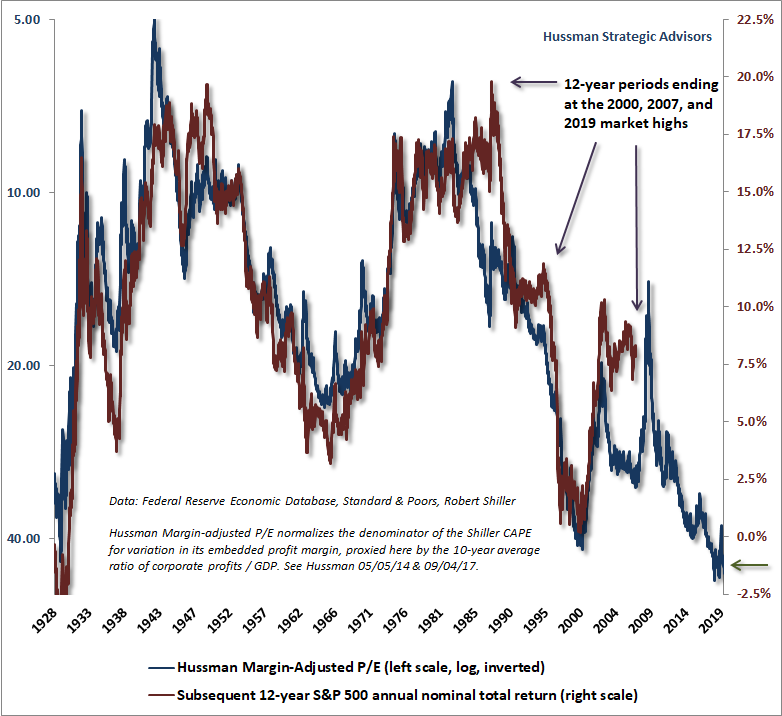 What does this mean? Well, it implies that the 4% rule will surely be tested.

For the sake of the 4% rule and, more importantly, the sake of retirees needing to fund retirement for the next thirty years, we must hope that if returns are going to be low that we also get DE-flation or at least avoid high inflation. Then, at least the purchasing power of our dollars will increase and allow retirees to actually reduce the amount they need to pull from their portfolios for a number of years.

The worst thing that can happen to retirees in a low-return environment is to combine low returns with high inflation like during the 70s, which put the greatest stress on safe withdrawal rates.. This period was even more taxing on the safe withdrawal rate than the Great Depression, which included a 89% decline!

As you can see, it is critically important to have robust financial projections, especially for anyone recently retiring or looking to retire soon. We also see how important it is to update the projections at least annually so we can proactively make appropriate adjustments.

I also believe portfolio risk management is critically important in order to potentially avoid the steep losses in U.S. stocks that may occur within the next several years. At a minimum, I think it’s important to be nimble with the portfolio and have the capacity to act quickly if needed.

Please reach out if you or anyone you know would like to work with me -> an advisor who thoroughly understands and consistently applies these critical concepts.

Additionally, you should have an advisor who also provides personalized service and is extremely responsive to your questions, needs and concerns. There is no reason to be waiting to hear back from your advisors for more than a few hours, but I’ve heard stories of people waiting a week to receive a reply! That’s completely unacceptable and, I’m afraid, far too common.

And, finally, you should only hire an advisor who is independent. A fiduciary. No more brokers, no more commissioned salespeople advising you on your finances. No more conflicts of interest.