Don’t look now, but the U.S. stock market is in its second longest bull market since WWII. As of January 12th, the bull market is aged over 7 years and 10 months. The S&P 500 is now 236% higher than it was on its March 9th, 2009 closing low. A chart depicting this period is provided below. 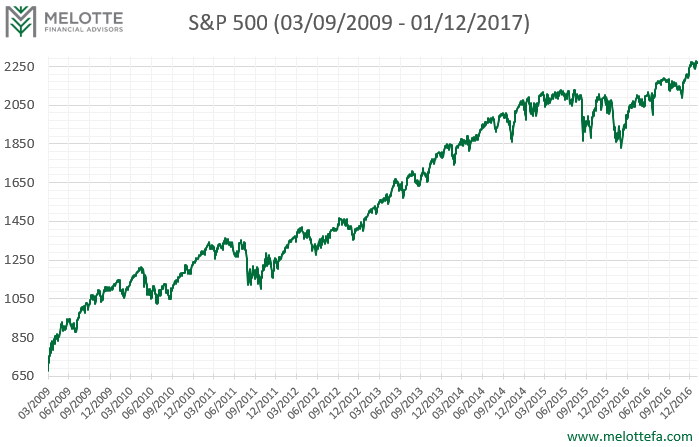 You might also notice that during the bear phase there were moments of sharp reversals and strong returns, which is not abnormal for a bear phase. In fact, brief periods of positive returns are typical in bear markets just as corrections are common in bull markets. These sharp v-shaped reversals are like head fakes that cause investors to jump in again in anticipation of the beginning of a new bull market only to fizzle away as the market resumes its march lower. This is why market timing is impossible. 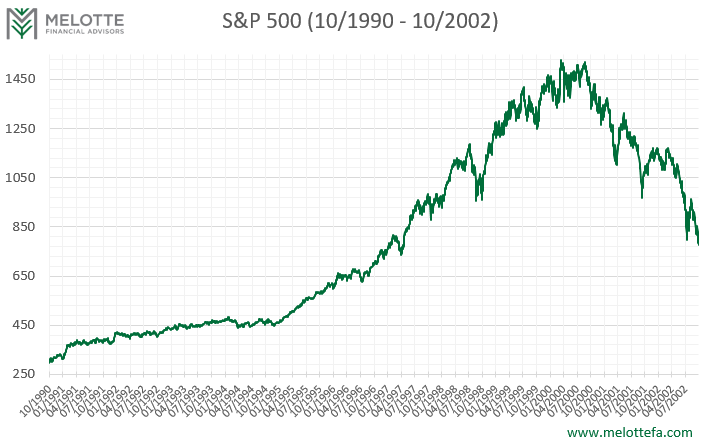 So what does this mean for the market going forward? Well, truthfully, not much on its own. The longest bull market in history lasted over 9 years and experienced even more impressive returns while there have been much shorter bull markets as well. So neither duration nor magnitude of a bull market tells us much about when it may end. What is far more important, however, are market valuations.

The Shiller PE ratio has historically been a reliable indicator of subsequent ten-year market returns. This measure indicates we are currently experiencing the third most extreme valuation going all the way back to 1900! In other words, current valuations have been exceeded only by the Great Depression and the Dot-Com Bubble. It may not feel like we’re in such rare territory, however, because the U.S. stock market has spent the majority of the last 20+ years in this excessively valued territory.

The implications for the S&P 500 are anemic returns over the next ten years of around 4%… roughly half the historical average. 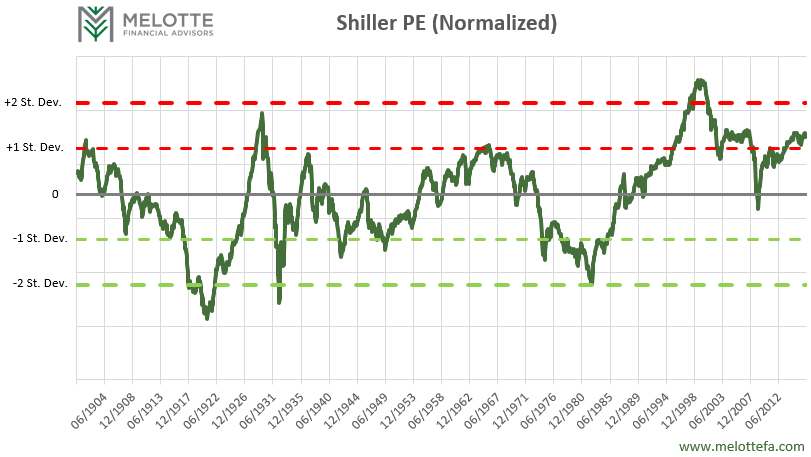 Market Cap/ GDP, data sourced from the Federal Reserve Economic Database, is Warren Buffett’s favorite valuation measure according to a comment he made in a 2001 Fortune interview. The chart below goes back to the early-50s and is reflecting the second-highest valued market over that period. Shaded bars represent recessions.

Dr. John Hussman has been performing extensive valuation work over the last couple decades, and he has also found Market Cap/ GDP to be one of the most reliable predictors of market returns. In Dr. Hussman’s December 19th commentary, “Red Flags Waving,” he reviews Market Cap/ GDP and what it may be signaling for S&P 500 returns over the next twelve years.

Given the fact that 10-year Treasuries are yielding around 2.4%, his expectation is that U.S. bonds will actually outperform U.S. stocks over the next twelve years on both an absolute and risk-adjusted basis…interesting.

So combining Shiller PE and Market Cap/ GDP we’re looking at a potential return range on the S&P 500 of 1%-4% annualized.

This measure is at an extreme never seen previously going all the way back to almost 1950.

It’s safe to say that these historically-reliable valuation metrics are predicting returns that fall far short of historical averages over the next decade. However, this is not to say the market will produce consistently low returns over the next ten years but more likely very volatile returns with more positive years than negative years. However, the negative years could be far more severe and could wipe out the positive years, which is how the market would achieve merely one to four percent over the full 10-year period.

With volatility comes opportunity, but only if you are able to preserve some dry powder for the downturns and remain disciplined enough to jump in when everyone else is bailing out. This means going against the herd by being a little more conservative as the bubble matures and then getting more aggressive when it feels like the world is ending. Risk management and disciplined rebalancing will be the key to preserving and growing wealth over the next decade. It may also be important to incorporate other assets than just traditional U.S. stocks and bonds. As Warren Buffett has said, “Be fearful when others are greedy and only greedy when others are fearful.”

The question is how high will the market rise before the bear market begins? It’s an impossible question to answer as we’ve seen valuations soar much higher than even current levels before topping out. All the valuation measures discussed here are reliable for forecasting 10-year returns but no measure reliably predicts short-term returns so we can’t use this data for making short-term investment decisions. Always consult a professional advisor who intimately understands your goals, resources, risk tolerance and unique circumstances before making significant investment decisions.

Please keep in mind the point here is not to motivate you to start timing the markets. My goal is to educate and set realistic expectations so that you can revisit your long-term investment strategy armed with knowledge and a realistic outlook. As with all my commentaries, this is meant as an educational tool not investment advice. If you want to know how you should be applying this information to your situation, please reach out to me. I’m happy to help. It’s why I am here.

The question is how high will the market rise before the bear market begins? It’s an impossible question to answer as we’ve seen valuations soar much higher than even current levels before topping out. All the valuation measures discussed here are reliable for forecasting 10-year returns but no measure reliably predicts short-term returns so we can’t use this data for making short-term investment decisions. Always consult a professional advisor who intimately understands your goals, resources, risk tolerance and unique circumstances before making significant investment decisions.

There are many other factors not discussed here that influence market outcomes! No one or two datasets can tell the whole story.