The returns on both stocks and bonds for the next ten years are likely to significantly underperform their long-term averages. However, I believe there will be a generational opportunity to buy up great assets at fire sale prices within the next 5-8 years.

We also need to be looking “outside the box” for non-traditional assets to include in portfolios that may offer more attractive risk-return profiles than traditional bonds and stocks.

Yesterday, I was updating various market metrics I follow. Came across something interesting.

First, some brief background. Shiller PE is just one of many measures of market valuations. Shiller PE is the price of the S&P 500 Index divided by the last ten years of inflation-adjusted earnings for the S&P 500 (essentially a variant of price / earnings). This ratio helps us determine if price is very high, very low or reasonable relative to underlying earnings in the context of history.

The higher the ratio the more expensive the market (and potentially lower the future returns) and vice versa.

However, the data below is not that useful in real-time because (1) the Shiller PE peaks and troughs are not at consistent levels. For example, the level at peaks have ranged from 22.2 to 44.2 while the level at troughs have ranged from 4.8 to 13.3, and (2) you don’t know you’ve reached a peak or trough until well after the fact potentially causing you to sell stocks too early or too late.

The average Shiller PE at its important peaks is 31.1. October’s Shiller PE was 31.62. The peak PE for this cycle was set in September of 2018 at 32.6. But we know from the Dot-Com Bubble that popped in 2000 that Shiller PE has gotten to 44.2 so it’s very difficult to know if valuations have peaked yet or not.

So, then I looked throughout history to find months where Shiller PE has been between 28 – 32, or roughly at current levels. There have only been 17 such months going back to 1929. These 17 months generally encompass just three periods (1) 1929 right before the Great Depression, (2) 1997 three years before the Dot-Com Bubble burst and (3) 2001-2002 as valuations were on their way back down from the Dot-Com Bubble burst.

The annualized price returns from these periods have ranged from -9.14% to 6.72%. In other words, best case from current valuations is that U.S. stocks have matched their long-term averages from elevated valuations and worst case was a 60% loss over 10 years. That’s not a great skew.

But when we invest we don’t simply have a choice between stocks or nothing. So I compared the returns of stocks to the returns of 10-year Treasury bonds for those same 17 periods. What I found is there’s not a single instance where the price returns of the S&P 500 outperformed 10-Year Treasuries. The average 10-year Treasury yield for those 17 periods was 5.2% while the average annualized price returns of the S&P 500 was just 1.3%. So even if you add 2%-4% for dividends you have not matched the yield on 10-Year Treasuries when starting from a Shiller PE of around 30.

Currently, the 10-year Treasury yield is about 0.9%. So does that mean the S&P 500 has a better chance of outperforming this time because the hurdle is so low or are Treasury yields low because projected economic growth and inflation estimates for the next ten years are also low? It’s possible stocks may even underperform the meager 0.9% offered on Treasuries for the next ten years. Dr. John Hussman has performed extensive, in-depth valuation work that suggests the latter outcome is more likely.

The correlation of Shiller PE to subsequent 10-year returns is about 83%, which is pretty good. However, we have better metrics with higher correlations. One of those is Market Cap / GDP (or variants of that), oft-termed the “Buffett Indicator” as Warren Buffett has said this is probably the single best measure of where market valuations stand at any moment. Per Dr. John Hussman, the Buffett Indicator has about an 89% correlation with subsequent 10-year returns.

Here I have no past examples from which to draw as Market Cap / GDP has never been as high as it is today (I only have data going back to 1950). The closest it’s been previously was at the heights of the Dot-Com Bubble of 2000, and we know what happened there. 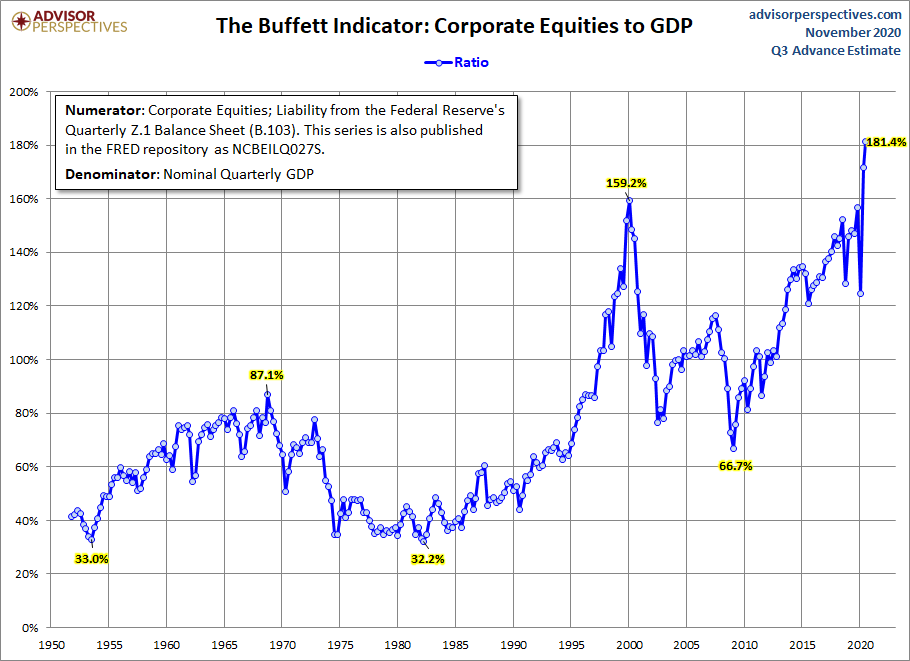 One thing is quite clear to me, the returns on both stocks and bonds for the next ten years are likely to significantly underperform their respective long-term averages. However, I also believe there will be a generational opportunity to buy up great assets at fire sale prices within the next 5-8 years. But we also need to be looking “outside the box” for other non-traditional assets to include in portfolios that may offer more attractive risk-return profiles than traditional bonds and stocks.

Finally, these factors and expected returns must be considered when both (1) preparing financial projections, and (2) determining appropriate investment strategy.

I use *price* returns simply because I don’t have data for *total* returns going back as far as I need.