Normally, when evaluating the markets I focus on valuations, but today I’m going to focus on shorter-term signals.

The reason I normally focus so heavily on valuation metrics is because they help inform investment strategy and rates of return assumed within clients’ financial plans. However, as I’ve stated ad nauseam over the last year, even the most reliable valuation metrics aren’t useful for predicting short-term returns. The reliability of valuations relates to subsequent 10-12 year market returns, which is why I thought I’d provide perspective from a different angle today.

Shorter-term price movements are mainly a psychological phenomenon driven by investor emotions and their inclination towards speculation or risk-avoidance regardless of underlying fundamentals. As you can probably guess, it is far more difficult to forecast short-term returns for this reason. Short-term movements are not necessarily grounded in fundamentals, which is why valuations can occasionally become extremely high (e.g. 1929, 2000, 2018) and extremely low (e.g. 1942, 1982).

However, there are metrics traders use in an attempt to identify short-term entry and exit points or identify when a market run / sell-off might be getting “exhausted.” Here I’ll review some of the indicators I monitor on a daily, weekly, and monthly basis.

We already know current valuations are extreme making today’s market the most overvalued in history. That’s not to say current momentum can’t carry the Dow Jones Industrial Average to 30,000 within a couple months, because it certainly can. After all, there is a lot of momentum and price increases have been accelerating so as they say, “don’t fight the tape.” By the way, a move to 30,000 on the Dow would represent about another 15% from here and about a 70% increase since Election Day 2016.

Volatility
Last week the market set a different new record…longest streak in history without a 5% correction.

Last week also included the first day ever in which the S&P 500 closed at a 52-week high while the VIX (volatility index) closed at a 2-month high. Usually these two indexes move in opposite directions.

The chart below shows instances where the S&P 500 closed within 0.5% of its 52-week high AND the VIX closed at a 2-month high. It doesn’t happen very often. 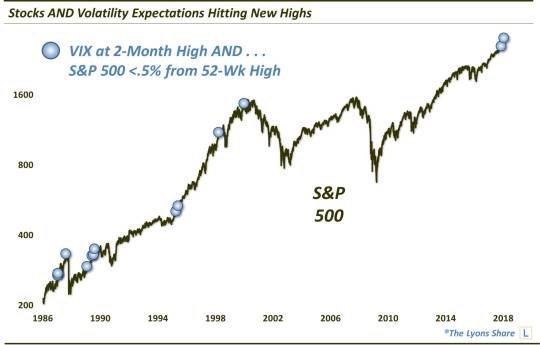 Analyst Sentiment
Analyst Sentiment measures the difference between analysts raising earnings forecasts and those lowering forecasts. Per Bloomberg, the last time this gap was as wide as it is today was in May of 2010. May 2010 marked the end of a three-month period in which the S&P 500 was up 10% and kicked off a 15% slide over the next couple months. Charts from Bloomberg. 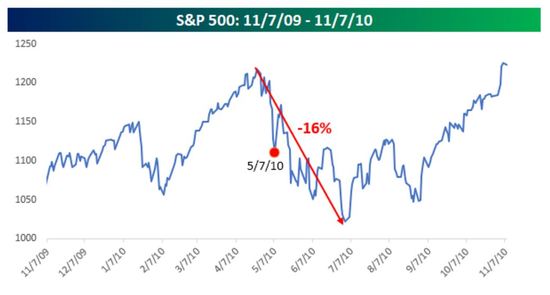 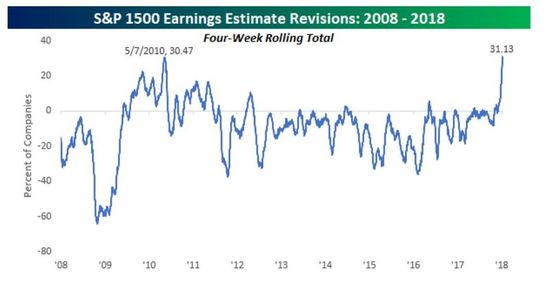 Retail Investor Sentiment
E*Trade’s quarterly study for Q1 of 2018 revealed that 68% of investors remain bullish, the highest in four years. It also revealed nearly 8 out of 10 investors believe the market will rise this quarter. Compare that to Q1 of 2016, before this massive bull run started, when only 45% were bullish. Retail investors tend to be pretty reliable contrarian indicators. In other words, when retail investors are very bullish tread cautiously and when retail investors are very nervous look for buying opportunities. This is exactly what Warren Buffett meant when he said, “be fearful when others are greedy and greedy only when others are fearful.” 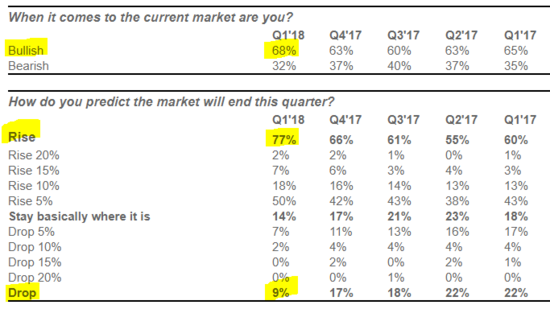 The Investor Intelligence Survey reveals similar trends. Their Bull / Bear Ratio is the highest its been since 1987 in advance of the Black Monday crash (22% decline). This ratio tends to peak before corrections and tends to bottom before markets bounce.

Credit Spreads
Credit spreads measure the difference in yields between two bonds with a similar maturity but different credit quality. Narrowing spreads indicate growing confidence in the ability of borrowers to service their debts while widening spreads indicate concern. Very narrow spreads that reverse and begin widening tend to signal trouble ahead making this a leading indicator.

Currently, high yield spreads remain very tight and are not yet indicating trouble. 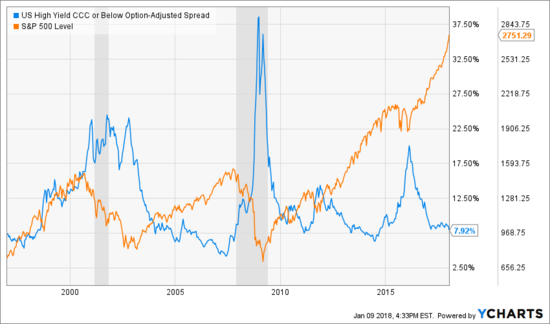 For instance, we can compare the 10-year Treasury rate with the 2-year Treasury rate. Both have the same credit quality but have different maturities (2 years vs. 10 years). When we do this for all Treasury bonds and plot the rates on a chart we get what’s called the yield curve.

Notice the chart immediately below plots the yields of Treasuries with different maturities. The line formed is a curve. The dotted line represents the yields as of December 31, 2013 while the solid blue line represents yields four years later as of December 31, 2017. Notice how much “flatter” the yield curve has become since 12/31/2013? This “flattening” effect has occurred before every recession of at least the last forty years if not more. 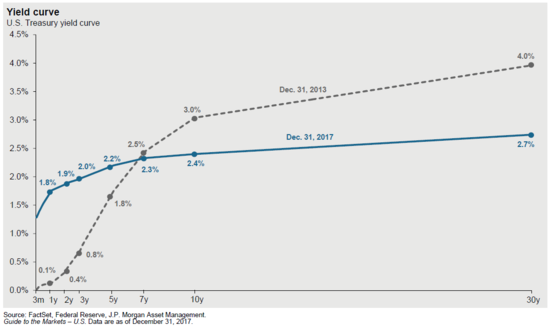 Notice how the line in the bottom pane bottoms and then reverses just before recessions in the past? Further observe the spread today along with the trajectory of the last few years? The yield curve has been flattening and is approaching “0%” potentially indicating the end of the growth cycle.

Bear in mind it is not unprecedented to get false signals. 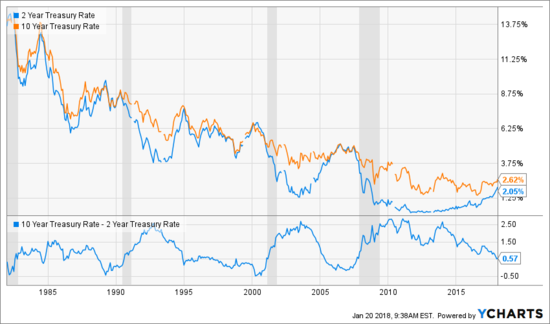 Relative Strength Index
The Relative Strength Index (RSI) may indicate overbought or oversold conditions. The RSI for the MSCI World stock index is now at its highest level since April 1987. The S&P RSI is higher now than it’s been since mid-1996. While the Dow RSI is higher than it’s ever been…ever. My analysis of the charts, however, indicate that you first need to see a break down in the RSI from a peak before the market begins a pullback. 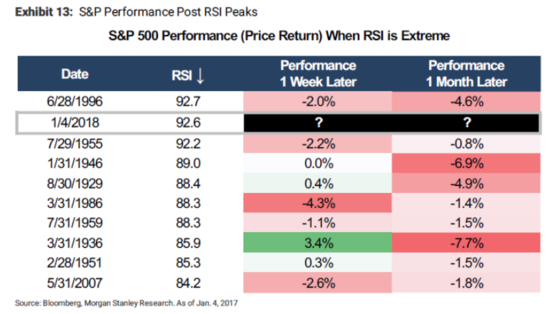 Advance-Decline Line
Short-term traders also follow market breadth, which is commonly identified by measuring the number of advancing stocks versus declining stocks. Generally, greater breadth indicates greater appetite for risk, which can be bullish for the market. As John Hussman puts it, “when investors are inclined toward speculation, they tend to be indiscriminate about it.”

The metric used to measure breadth is called the Advance-Decline Line. Per Investopedia, “This indicator is used by many traders to confirm the strength of a current trend and its likelihood of reversing. If the markets are up but the A/D line is sloping downwards, it’s usually a sign that the markets are losing their breadth and may be setting up to head in the other direction. If the slope of the A-D line is up and the market is trending upward then the market is said to be healthy.” 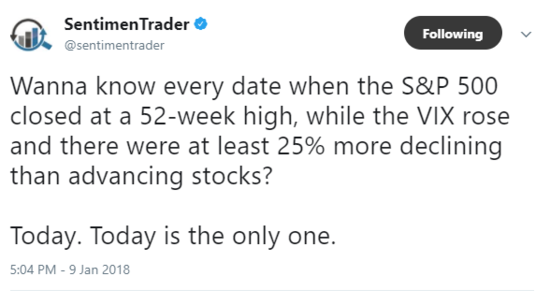 High yield bonds tend to act more like stocks than high-quality, safe bonds. So tracking the A-D line of high yield bonds relative to the S&P 500 can often help identify turning points. The High Yield A-D line has begun to diverge from the S&P 500. 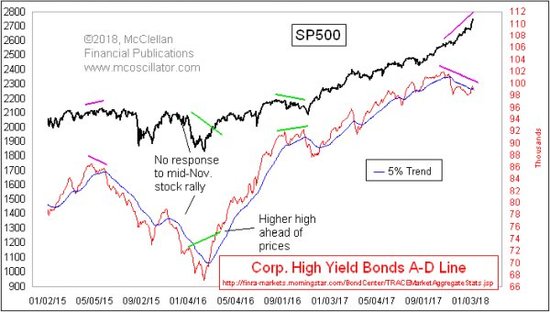 Conclusion
Long-term valuations and short-term indicators are both indicating the stock market is nearing a peak. In fact, this is the most overvalued, overbought, and overbullish market in history. However, there hasn’t yet been an explicit breakdown in the short-term indicators, which may be the necessary precursor before a market reversal.

I am concerned that when the next bear market comes it will produce staggering losses for unprepared investors. Don’t take on more risk than you afford either financially or emotionally.

Past performance is no guarantee of future results. No one or small subset of indicators can reliably predict market performance. Information herein is intended as educational material only NOT investment advice. Always consult your advisor who thoroughly understands your unique goals, circumstances, and expertise.