Major economic policies are determined by economists and politicians relying largely on GDP and the Unemployment Rate. These policies have an enormous impact on our lives and wide-ranging implications for our nation’s future. The problem is that much of the data upon which we rely are imperfect at best. Today’s commentary is not meant to be exhaustive but intended to simply highlight a couple issues…certainly, there are more.

GDP Data
GDP is the acronym for Gross Domestic Product, and it is widely used as THE measure of economic health and prosperity in the United States.

Imagine that an economist suggests the Army clear New York City of all its residents then level the city. The purpose of the ludicrous suggestion being to ignite economic activity and create jobs rebuilding the city. After all, this would surely result in an increase in both GDP and jobs, and, since GDP is a measure of economic prosperity, this would have to mean the economy is improving, right?

Wrong! Of course not.

Yes, GDP would tick up as a result of the increased activity, but our living standards would not improve and our nation would not be better off. In fact, our nation (and the world) would actually be poorer as a result because we’d have used up resources that could have been used for other, new stuff that could have actually improved our lives instead of using those resources to rebuild something we already had. Remember, resources are not in infinite supply so we must economize our resources by putting them to their highest and best use.

Such a policy would, of course, be tremendously wasteful. But it’s not as far-fetched as you might think. I’ve often seen academic “economists” try to identify the silver-lining of a natural disaster (like a hurricane) by referring to all the economic “benefits” that flow afterwards in repairing the damage.

So one problem with GDP is that it measures economic activity but does not measure economic health, prosperity, or living standards. Policies enacted for the sole purpose of increasing GDP can actually be counterproductive.

Unemployment Data
Below is a chart of the common unemployment figure, which currently reflects a very low 4.3% unemployment rate. The second chart below shows the employment-population ratio. Notice the divergence in the data? The former shows a robust labor market about as good as it can get while the latter shows a lot left to be desired. How can their be such a stark contrast? 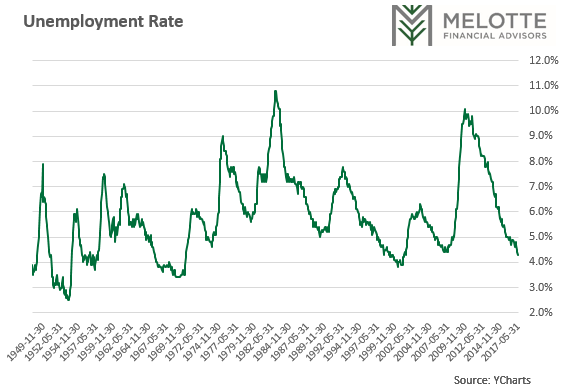 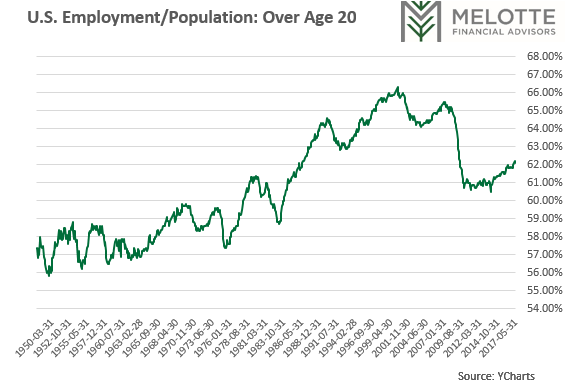 See what I mean? Even though the unemployment rate is at 4.3%, which is at/near “full employment,” the employment-population ratio is only about 62% and remains far below its recent peaks.

Unemployment Data – Part 2
Okay. Let’s go down a different path. Imagine there wasn’t a divergence in the employment data and both metrics provided above reflected a robust labor market. Furthermore, imagine some genius entrepreneur creates one of those Easy Buttons from Staples®. With the Easy Button you can get anything you want materialized out of thin air with a simple press of a button. No labor is required to make any of it.

What would happen to the labor market? Well, unemployment would skyrocket towards 100%. But would that mean our economy entered the worst depression of all time? No. Of course not. In fact, everyone would be living a great life with tons of leisure time (this is not to say anything about feeling unfulfilled). See what I’m getting at?

Unemployment is not a great indicator of economic health and prosperity. A high employment-population ratio, if your workers are not productive, does not mean the nation is prosperous and living standards are high. For example, imagine 80% of your labor force was employed in agriculture grinding it out in the fields everyday. You would have a high employment-population ratio, but your country is poor and provides a low standard of living for its citizens.

The point is not to create a job for the sake of creating a job, but to create productive jobs. All jobs are not created equal. Our employment statistics don’t account for that, however, and our national job policies are usually aimed solely at improving the unemployment figure without regard to productivity. Hell, we can always improve the unemployment rate by hiring unemployed workers to dig holes and fill them back in again. We could keep the unemployment rate extremely low if we wanted, but it would actually make us poorer as a nation to do so because the resources used to pursue such a policy would be wasted on unproductive work.

Conversely, a relatively low employment-population ratio doesn’t necessarily mean the country is struggling. If the labor is productive then it’s certainly feasible that the economy just needs less workers to produce what it needs for consumption or trade with other nations. If you refer back to that second chart above you’ll notice that the employment-population ratio was relatively low in the very prosperous 1950s/early-1960s because we didn’t need as many people working (i.e. a lot more stay at home moms, etc.) to produce what we needed and then some. Not only that, our national finances (public and private) were in much better shape, we ran trade surpluses, and the poverty rate was not much different than today and falling – By the way, since LBJ’s “war on poverty” in late-60s our poverty rate has stagnated whereas it was dropping for about 150 years to that point.

So, again, the metrics in themselves don’t tell the whole story. Employment data needs to be combined with productivity data to get at least a better sense of where the labor market (and economy more generally) stands. We must look beyond the traditional, headline employment statistics and understand what kinds of jobs are being created, how productive are those jobs, what do they pay, etc.