I’d like to share this week’s survey results. Just a quick refresher that the question was “What is your take on the S&P 500?”

A) It already peaked on January 26th.
B) It will set a new high and peak later this year
C) The peak is still a long way off

I posted the exact same survey on Twitter so I’ll get to those as well. I received 40 responses to the email / Facebook survey and an impressive 213 votes on the Twitter survey.

Here are the results of the emailed / Facebook survey: 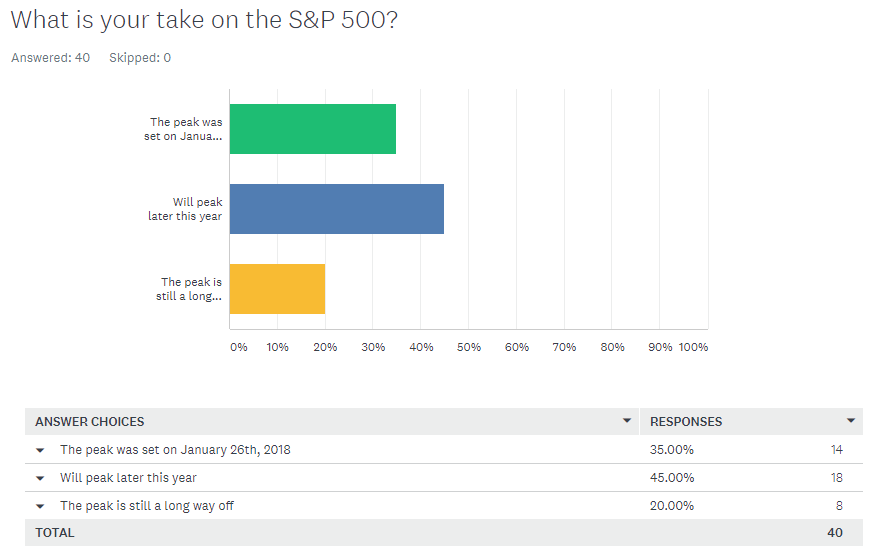 35% of you think the peak is already in (implying we’ve already entered the bear market) while 45% of you think we’ll make a new high and peak later this year before entering the next bear market. Only 20% of you believe the peak is still a long way off. I gotta admit. I’m surprised by the results. I didn’t realize that, as a group, you were such pessimists! 😉

I also had a few of you email and say “I have no idea!”

Isn’t it difficult to answer this question with confidence? This survey, unintentionally, was a good illustration as to why market timing is impossible to get right consistently. The short-term is too hard to predict with any certainty because short-term price movements are based on investor emotions and investors’ appetite for risk (or lack thereof). Those investor emotions can change quickly, and there are thousands of factors influencing those emotions daily. No matter how bad the fundamentals are, bubbles can persist for longer than we expect, which is why I always remind readers that valuations are useless for short-term trading.

If so many are pessimistic and this is a microcosm of the broader population, why aren’t we seeing more selling from retail investors in the broader marketplace? Some potential explanations for this disparity between “view” and “action” are:

1) Respondent believes the next bear market will be relatively mild so it’s not worth trying to avoid it
2) Respondent / their advisor subscribes to a buy-and-hold-no-matter-what approach
3) Respondent believes they can time the market and get out in time before the next crash
4) Respondent is relatively young with a relatively small investment portfolio so impact of bear market on their life is minimal
5) Respondent has low confidence in their view so not willing to make proactive adjustments based on that view
6) Respondent, although bearish, doesn’t know how to adjust their portfolio appropriately or where to turn so they become paralyzed and inertia takes over

The Twitter poll results were even more pessimistic, which was to be expected given the bias of the folks with whom I engage, follow and who follow me. The Twitter poll respondent group also has a much higher proportion of folks either working or with interest in finance / investments / trading / economics whereas my email list is probably a better sampling of the broader population (more diverse careers, etc…). Twitter results are here: 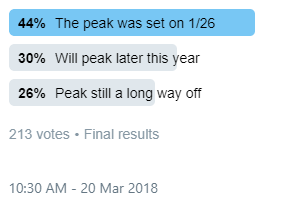 A month ago I would have said with greater certainty that I believed the market would go on to make higher highs later this year before peaking. The reason for that is it is just so rare to go from a period of extremely-low volatility and record highs straight into a bear market. Oftentimes, markets experience foreshocks and “chop” which are needed to shake out momentum and raise investors’ alertness.

The markets become choppy for a period, which rattles investors’ nerves and makes them a little more trigger-happy. What I mean by this is greater volatility / chop makes investors a little quicker to sell their holdings at the first sign of trouble, which can then exacerbate a sell-off and feed a vicious cycle. Without those foreshocks to breakup momentum and sentiment, the mentality that persisted on the way up (i.e. buy the dip) can continue to persist essentially putting a floor under the market as investors rush to buy the dips. As investors get rattled, however, they become less likely to buy the dips and more likely to sell at the first sign of trouble.

But now, the market has obviously been struggling to get back to the 1/26 peak and, of course, there are things about which to be concerned. The Fed continues on it’s path of tightening (although we’ll learn more in 1 hour when they release the statement from their March meeting), valuations are more extreme than ever while analysts’ earnings estimates have exploded higher leaving a greater likelihood for companies to disappoint by missing earnings estimates going forward, household net worth to income is higher than ever, unemployment appears to be nearing cycle lows, budget deficits are ballooning, LIBOR rate has jumped higher, interest rates have risen, etc…

In summary, there are lots of “threats” to market stability so the longer we go without retaking the prior highs from 1/26 the greater the possibility the 1/26 high ultimately ends up being the peak of the cycle. Of course, by the time we have confirmation we’re in a bear market it’ll be too late to make adjustments.

The results of both polls are interesting to me as a contrarian. As a contrarian I become wary when everyone / majority believe in a particular outcome (bear market) because, at that point, the outcome should already be priced in, which it (bear market) obviously isn’t as of yet. However, even though the poll results were pessimistic we don’t see people selling their investments en masse and CNBC / most financial news commentators remain very bullish on the economy and markets.

One possibility that struck me is that many investors believe we’re late in the cycle but perhaps also believe they can get out in time before the market crashes? Essentially, they believe they can time the market. That is scary to me because when that time comes it’ll be like a bunch of people in a crowded theater rushing to a single exit door. In times of crisis liquidity dries up meaning you cannot exit at the price you want because there is no buyer.

This liquidity effect may be magnified in the next crisis because so many investors are using passive index funds and, particularly, ETFs within their portfolios. First, this means markets are not priced as efficiently because indexing means investors are being funneled into the largest / most overvalued / most over-indebted companies without regard to price. Secondly, ETFs are billed as a liquid instrument that allows for instantaneous trading. The problem is that the underlying investments are not always liquid especially for ETFs that are already accessing less liquid markets. This creates a major problem. Not everyone will be able to exit simultaneously at a particular price and every security has to be held by someone at all times.

Well, those are just some preliminary thoughts I had on the poll. I am a little surprised by the results, but it’s very interesting to me to gauge investor sentiment. So, if you participated, I really do appreciate it!

I’d be curious to hear any interesting perspectives you have from the poll results as well!