The widely followed S&P 500 index ended 2020 over 16% higher (18.4% total return w/ dividends) than it began the year even as it experienced one of the sharpest 34% declines in history (mid-February to mid-March).

The U.S. stock market managed a great year even in the midst of a global pandemic that saw businesses shut down, tens of millions of people lose their jobs, spike in corporate defaults, a steep recession (we’re still in BTW) and S&P 500 earnings that declined 13.6% from the prior year.

This means the entire increase in the S&P 500 was from expansion of the Price/Earnings multiple to over 30x, which is a level ONLY seen throughout history in the Dot-Com Bubble and Great Financial Crisis. The long-term average is about 16x. END_OF_DOCUMENT_TOKEN_TO_BE_REPLACED

The gain since the announcement alone in one month’s time (adding almost $300 billion of market cap) amounts to more than the entire Toyota company! Think about that for a moment. Tesla has added the value of the world’s most profitable and largest automaker in the blink of an eye on no fundamental news whatsoever. END_OF_DOCUMENT_TOKEN_TO_BE_REPLACED

I’ve written about the potential for huge price swings in both directions previously.

This puts the S&P 500 down a little over 3% on the year while the global stock market is down over 7%. Meanwhile, gold and bonds are up on the year. 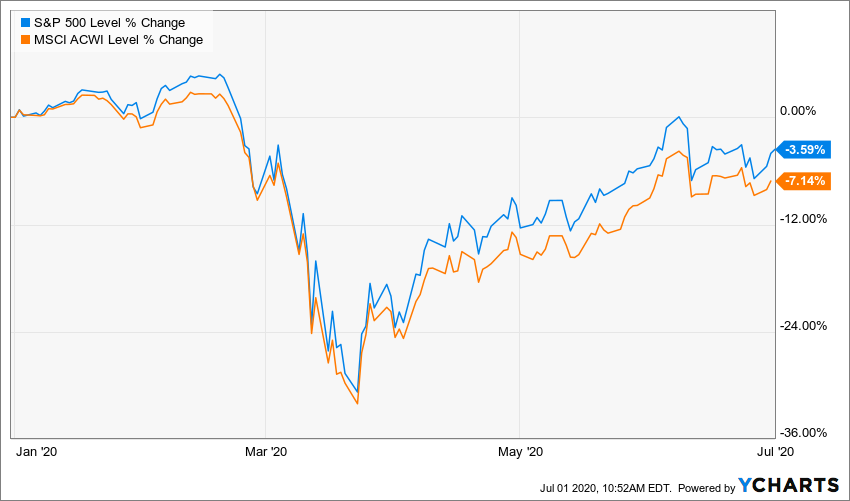 END_OF_DOCUMENT_TOKEN_TO_BE_REPLACED

The S&P 500 is now more concentrated than ever before with the largest five companies now accounting for over 21% of the entire S&P 500 (by market cap)! Those top five stocks are Microsoft, Apple, Amazon, Alphabet and Facebook.

The concentration recently surpassed the previous record from the year 2000, which amounted to approximately 19%. In 2000, the five largest stocks were Microsoft, GE, Cisco, Intel and Walmart. 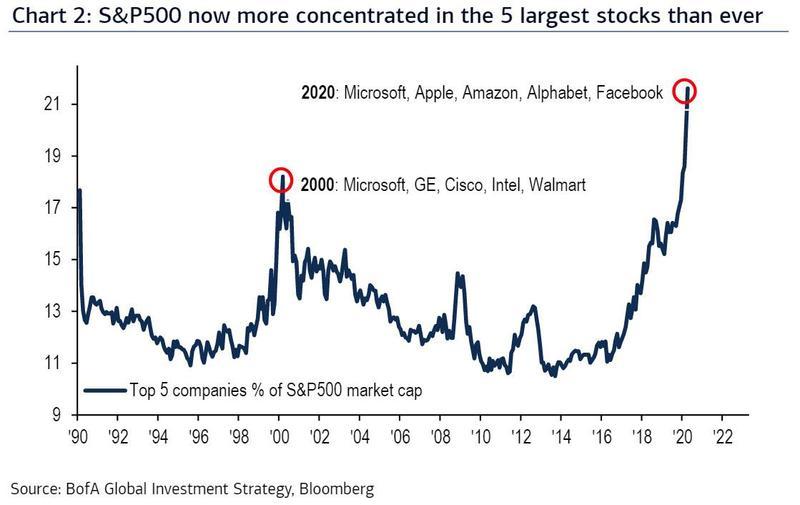 END_OF_DOCUMENT_TOKEN_TO_BE_REPLACED

First of all, I am very happy to see new data coming in these last few weeks indicating the Virus is far milder than initially believed. Although the World Health Organization initially indicated at least a 3.4% fatality rate, it appears the fatality rate may even end up closer to 0.05% – 0.4% roughly in the range of the flu even without a vaccine in place.

It appears the risk to young, healthy people is negligible while the older population is at greater risk especially if there are certain other pre-existing conditions present. A large portion of deaths, around 50% in some regions, are in nursing home populations. Lockdown policies around the nation should account for these facts and disparities.

We’re also starting to see COVID-19 hospitalizations waning. There were but a few overwhelmed hospitals, the nation has both excess ICU capacity and excess ventilators at this point contrary to the initial projections from the IHME and many States’ Governors’ offices. In fact, many hospitals around the nation are losing millions of dollars and furloughing staff.

In other words, the light at the end of the tunnel is coming into view. The market has been anticipating and rejoicing at this sight evident by the S&P 500’s ~30% rally from the March lows.