I speak a lot about U.S. stock market valuations because they are at historical extremes exceeding both the pre-Great Depression peak and the Dot-Com Bubble peak, however, today I wanted to focus on the labor market, specifically. It’s important we understand the progress that’s been made there.

From February to April the U.S. lost over 22 million jobs. This caused the official unemployment rate to skyrocket to almost 15% from 3.5%. There was a bit of a v-shaped bounce starting in April/May as some jobs were quickly regained. However, job growth has begun stalling. END_OF_DOCUMENT_TOKEN_TO_BE_REPLACED

This morning we learned that the November employment report was tremendous! U.S. companies added over 260,000 jobs, which far exceeded expectations. This pushed the employment rate back down to 3.5% matching the low from earlier this year, which is the lowest since 1969.

There were some concerns about the potential for this report because the ADP employment report from Wednesday was so poor. That ADP report indicated private sector job growth of just 67,000 compared to the 157,000 expected.

The large discrepancy between the BLS report we received this morning and the ADP report from a couple days ago is very strange. Perhaps the truth lies somewhere between the two, but for now, the market appears to be taking the government BLS report at face value as the S&P 500 is up over 1.0% on the day at the moment.

Over the last couple weeks I provided you with two videos. There have been a couple developments since I released those. END_OF_DOCUMENT_TOKEN_TO_BE_REPLACED

Danielle DiMartino Booth, a former Federal Reserve insider, recently wrote a great article for Bloomberg. In it she provides a couple informative stats involving the relationship between unemployment rate changes and recessions.

First, she points out, “According to historic payroll data and the National Bureau of Economic Research, every time the three-month average unemployment rate exceeded its six-month average at cycle peaks over the past 50 years — like it did in January — the U.S. economy has experienced a recession.” END_OF_DOCUMENT_TOKEN_TO_BE_REPLACED

With the inauguration of a new President, it seems appropriate to identify a new economic and market baseline as a fresh starting point for the incoming administration.

First, the conditions President Trump is inheriting then we’ll see how those conditions stack up to his five immediate predecessors’.

All data as of 12/31 of year prior to inauguration unless indicated otherwise. 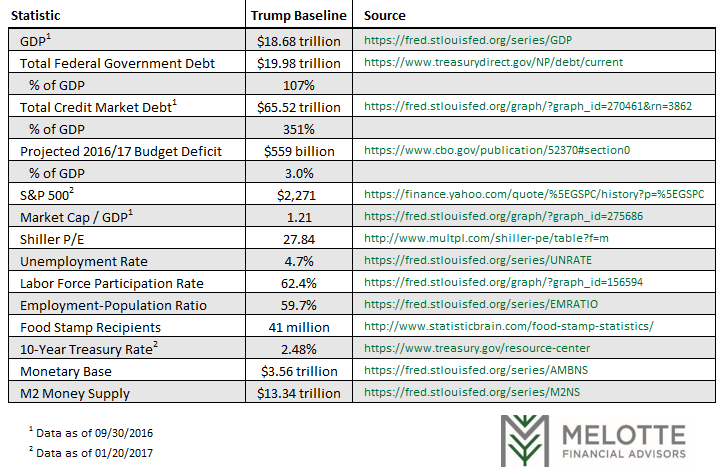 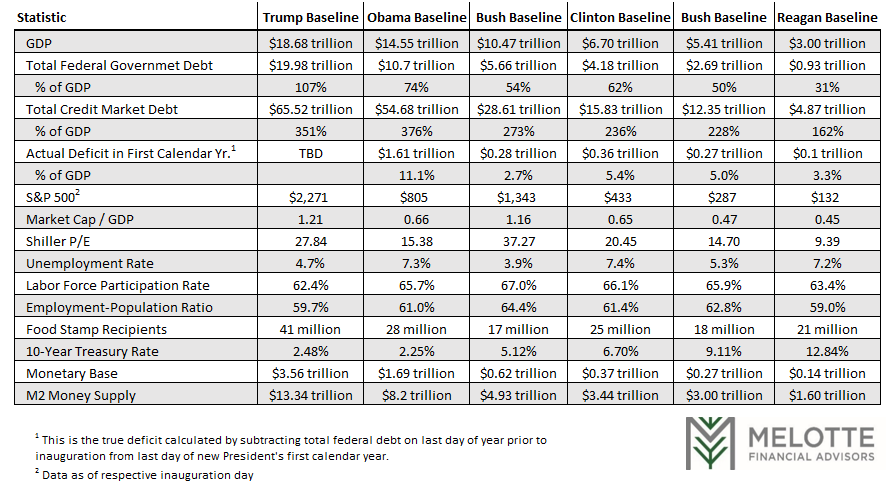 There are many observations to be made, but I’ll focus on a few I find particularly interesting.