Yesterday, Tesla released their Q2 earnings. I believe we are witnessing an extremely interesting case study in real-time that will be studied by future generations of investors and business students. So, I will continue to comment on it in real-time. There is simply so much to learn from this case, and it’s not often we have the opportunity to witness such an interesting situation as it unfolds.

Tesla closed yesterday with a market cap (the total value of all outstanding shares of stock) of about $300 billion and a per share price of $1,592. To put that in perspective, BMW’s market cap is about $40 billion. So, Tesla’s stock is worth about 7.5x that of BMW’s with just 1/7th the global sales!

In other words, if Tesla could somehow manage to increase its global sales SEVENFOLD in some future year then it’s stock would still need to drop about 85% to be commensurately valued. That put’s Tesla’s share price at about $248.Tesla has some other products so it’s not a perfect comparison but it gets us in the ballpark of a luxury automaker, but it’s also extremely unlikely Tesla will increase sales SEVENFOLD this next decade let alone the next few years.

On the other hand, if Tesla is unable to dramatically increase vehicle sales over the next few years, the stock may not be worth much of anything at all.

On with the Earnings

Tesla announced, for the first time in its history, four consecutive quarters of profit with Q2 net income at $104 million on revenue of $6.036 billion. The four consecutive quarters of profit is important as now Tesla qualifies for inclusion in the S&P 500, which could certainly provide it a boost as index funds must rebalance into Tesla whenever that inclusion occurs.

This implies Tesla’s price is about 850x earnings!

Interesting that Tesla recognized over $400 billion of regulatory credits in the quarter. So, over the last four quarters, Tesla’s GAAP net income has totaled just $368 million but with over $1 billion of emissions credits. Meanwhile, the market cap of its stock has increased over $240 billion!

One of the justifications for the massive run up in the stock price and the absurd valuation is that the company is growing so fast…i.e. it’s a “hypergrowth” company. But, that’s simply not true any longer as Tesla’s pace of growth has stalled. 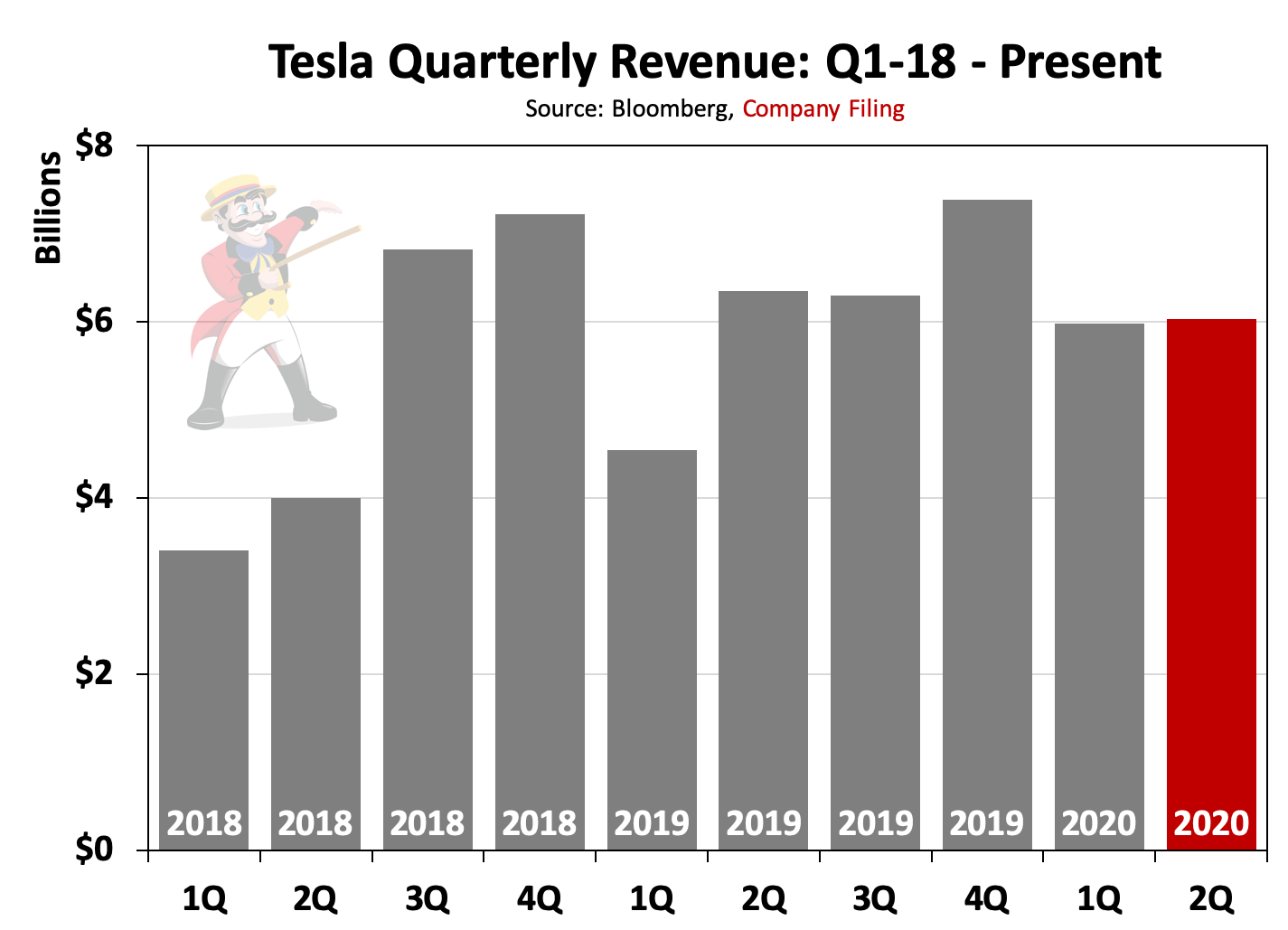 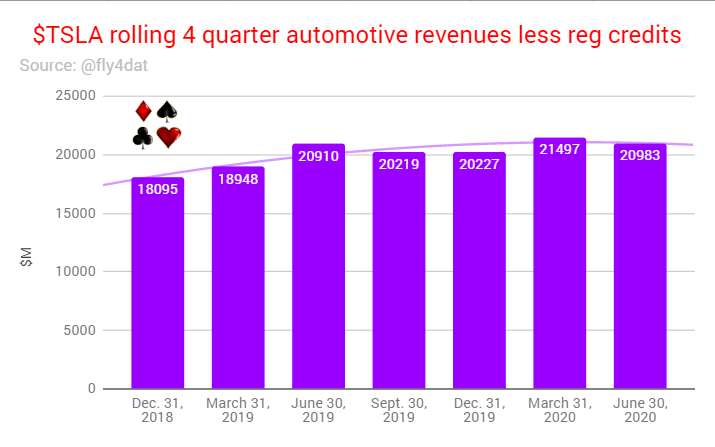 In yesterday’s earnings release, Tesla announced its Accounts Receivable increased to $1.485 billion from $1.274 billion. Remember that revenue for the quarter was $6.036 billion so Accounts Receivable amount to about 25% of quarterly revenue for a company that requires payment before, or at least upon, delivery! How is this possible?

Tesla has been pressed for explanations in the past. They’ve provided several different explanations over time and none of them add up.

I address why bloated A/R is potentially cause for concern in a previous commentary. If you want more detail on this issue I suggest you read the book Financial Shenanigans: How to Detect Accounting Gimmicks & Fraud in Financial Reports.

Another justification for Tesla’s lofty valuations is its solar roof product. However, it’s essentially a dying product insignificant in the scheme of the overall company as we see from the chart below illustrating Solar Mega Watts deployed. 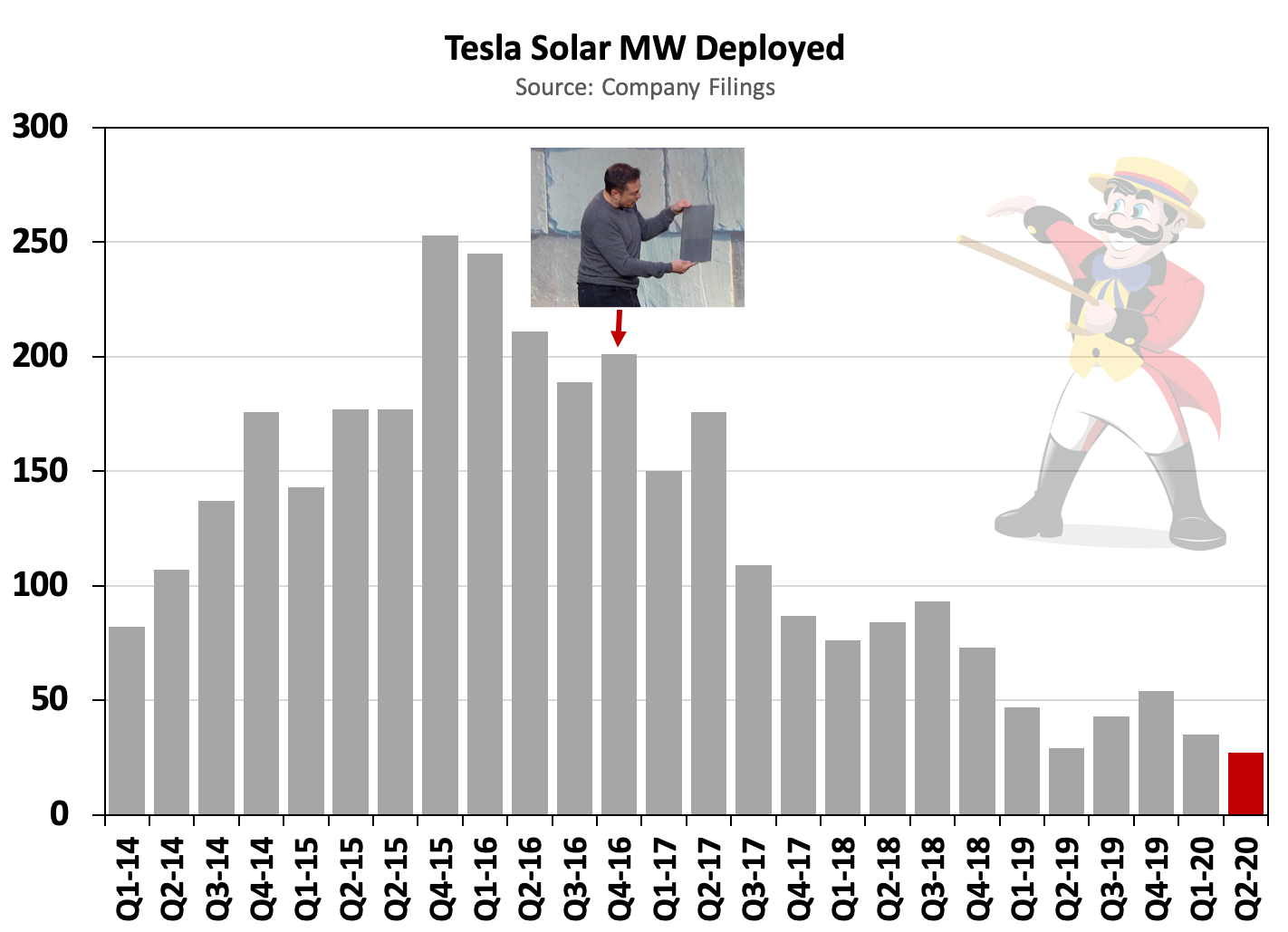 Previously, I’ve also addressed other inconsistencies and potential signals of issues (1) warranty expense and reserve practices, (2) anemic CapEx and (3) flatlining OpEx inconsistent with a new factory coming online. For those discussions simply go to my blog and type “Tesla” in the search box.

Disclosure: I currently own put options and put spreads on Tesla (bets on the stock’s decline) and will likely be buying more. These puts expire in August, September and March 2021.