The gain since the announcement alone in one month’s time (adding almost $300 billion of market cap) amounts to more than the entire Toyota company! Think about that for a moment. Tesla has added the value of the world’s most profitable and largest automaker in the blink of an eye on no fundamental news whatsoever.

By the way, since the release of my last Tesla commentary, Elon Musk admitted Tesla was within a months of bankruptcy during Model 3 production ramp just as I suspected.

Admittedly, what I didn’t expect was investors willing to throw billions more at the company on the back of obvious lies regarding autonomous driving capabilities and the like. But this is what happens in manias -> Euphoric investors latch on to every crumb without question and rationalize obscene valuations. The hangover of realization then becomes very painful. 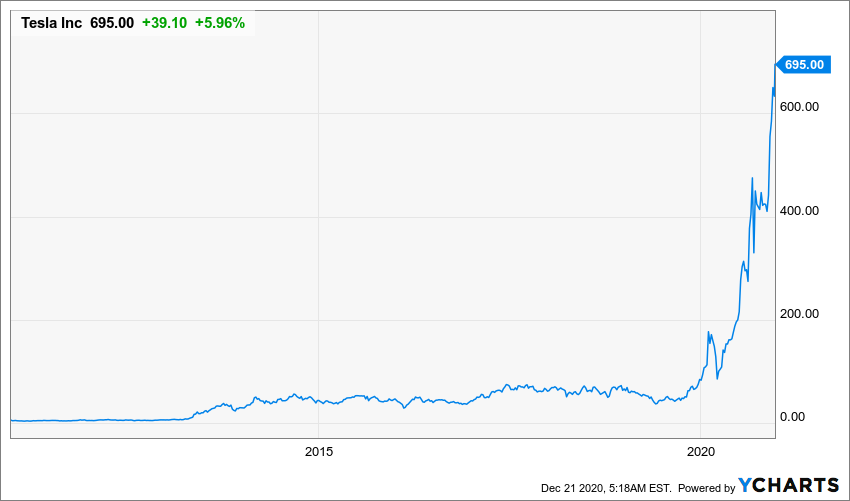 Below, I’ve listed the top 9 automakers in the world along with Tesla for comparative purposes and perspective.

Tesla’s market cap of $660 billion is equal to the TOTAL market cap of the top 9 automakers in the world…combined! Yet, Tesla’s revenue and income are each about 1/50th of the top 9’s. Tesla sells about 1/120th – 1/160th of vehicles produced by the Top 9 according to Research Affiliates.

On average, the top 9 automakers trade at about one-half their annual sales. Tesla, on the other hand, trades at over 23x its annual sales or about 50x richer!

No doubt, Tesla commands higher multipliers than other auto manufacturers due to its fast growth. However, at some point, Tesla will become a mature automaker with commensurate multipliers and will be valued accordingly.

Research Affiliates provides slices it another way, “The most generously priced major auto company, Toyota, is valued at about $19,000 per car based on the company’s current annual production rate, or a bit under $2,000 when we consider Toyota’s total production over the last decade… By contrast, Tesla is worth about $1.4 million for every car the company is expected to produce this year and around $500,000 for every car the company has produced over its history.”

In other words, how much upside do Tesla stockholders really think is left in the stock from here? What’s the downside risk versus opportunity? Mr. Bloomstran offers some thoughts on what would need to be achieved in order for Tesla to provide positive returns over the next decade…

At “only” 10% per year, the fully diluted market cap grows to $2 trillion, almost where Apple is valued these days. At a 10% return, to trade at 30x earnings, Tesla will need to be earning $67 billion.”

Quickly putting that $67 billion figure in perspective, Tesla’s current earnings are just $556 million or 1/120th what they would need in order to provide that 10% annual return even with a very generous Price/Earnings multiplier. Christopher goes on to say,

“For grins let’s assume the company actually earns some blend of auto maker profit (most earn ~3%, Toyota earns ~6%) and a subscription software, robotaxi margin of 30%. Generously call it a 20% blended profit margin, which I’d bet heavily against. At the impossible 20% margin, $67B would sit under $335B in revenues, roughly 11 times today’s run rate. Revenues will need to grow by almost 28% per year, and profits to 20% of revenues, to get to a 30x multiple on earnings.

To finance the necessary capital stock to produce $335B in revenues will require about half that much in capital, either debt or equity. Car companies require roughly a dollar in capital to produce a dollar in revenues, but remember we are “assuming” this is a software company or whatever else hallucinogens conjure up in the minds of bulls.

From a business case and investment standpoint, the math doesn’t work. Consider that total automobiles sold worldwide peaked two years ago at about 95 million passenger and commercial car and truck units. At $20,000 per new vehicle, we can call the global auto market $2T in size.

Our example has Tesla’s market cap growing over the next decade at “only” 10% per year to a like $2T. Car companies, with the exception of Ferrari, which makes three cars per year, don’t trade for one times sales. They trade for less.

The best case for shareholders: If Tesla grows the aforementioned sales for the next decade by 28% to $335B (it won’t), the stock will trade for no more than 1x sales, because it’s a CAR company. If it earns Toyota’s best in class 6% margin, even allowing for software “upgrades,” it earns $20B and trades for 25x, or a $500B market cap, which is a 33% loss from here people using diluted shares. If sales, margins or the multiple are lower, shareholders lose more.

The realistic case: The performance of the stock from here is a giant loss over time and the Tesla cult loses interest in the brand. In fact, they come to hate the brand because of their coming stock losses, customer and employee mistreatment.

You can play around all you like w/ assumptions for growth, market share, expansion into new markets, profit & returns on capital, but paying for some fractional ownership of today’s $760B fully diluted market value is highly likely to produce a disastrous investment result.

Bravo, S&P. The decision to add Tesla at present valuation is almost sure to exact pain on passive investors, compelled to “invest” 1.75% of capital in one of the most overvalued companies on record. Brilliant.”

Thank you to Christopher Bloomstran for sharing this analysis with the world. He did a great job of putting the insanity and delusion into perspective.

Disclosures:
I’m short Tesla stock via put spreads of varying strike prices and expirations and will be adding more.