Yesterday, the Federal Reserve confirmed the market’s expectations and announced they would be cutting rates for a third time this year. The rate cut is an addition to the recently-announced program of supplying $120 BILLION in liquidity each night AND announcing the resumption of QE whereby they’ll be buying $60 BILLION of short-term Treasurys each month.

In other words, the Fed is pursuing policy that, until the recent Great Financial Crisis, was unprecedented. Why? Why are they pursuing emergency policy actions when the economy is supposedly strong, stock market is near all-time highs, unemployment near all-time lows and inflation supposedly around 2%?

One of my predictions has been, and continues to be, that there will be stress in the corporate bond markets leading to a potential USD dollar shortage and potentially a large appetite for “safe” assets like US Treasurys. There is a tremendous amount of debt in the global economic system between governments, households and corporations. However, households, relative to 2008, are in decent shape. Governments and corporations maintain awful balance sheets. Since corporations cannot print their own money let’s focus on them for a moment.

Essentially, corporations have continued taking on a tremendous amount of debt over the last decade as the Fed had suppressed rates to almost zero for so long. Unfortunately, much of the funds borrowed weren’t necessarily used to innovate or expand productive capacity but to buy back stock, pay dividends, acquire other companies and/or roll over existing debt. We see here that corporate non-financial sector debt has risen to about $10 trillion from about $6 trillion over ten years. After all, money has been so cheap so why not?! 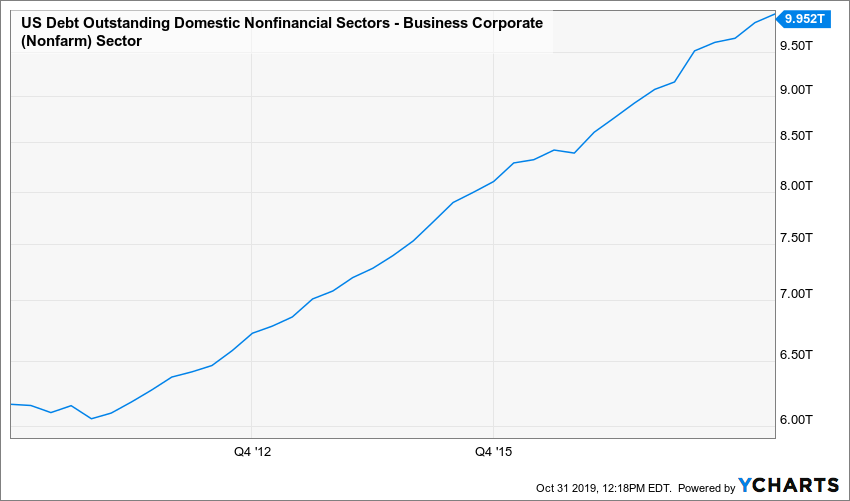 This has resulted in corporations becoming highly-leveraged with a relatively large share of companies barely able to service their debt from current earnings (let alone actually pay down the debt). These have been termed “zombie” companies. The share of US companies that qualify as “zombies” have risen to about 16% from about 2% in the early-90s!

Essentially, the only way these zombie companies survive is if someone remains willing to extend loans at very low interest rates. Once that liquidity dries up, and a taste for that debt subsides due to greater-perceived risks or any number of other factors, these companies quickly fall into trouble. Interest rates spike, and the risk of default spikes dramatically. THIS IS WHY THE FEDERAL RESERVE WATCHES THE BOND MARKETS SO CLOSELY!

I’ve already discussed the deteriorating credit quality of U.S. corporate debt here. Essentially, the credit quality of U.S. corporate debt is the worst it’s ever been with more companies than ever teetering on the edge between “investment-grade” and “junk.” In fact, using historical leverage ratios, many companies’ debt currently classified as “investment grade” would actually have been classified as “junk” in the past.

These dynamics make zombie corporations extremely fragile and susceptible to even small declines in profit margins and revenue potentially resulting in waves of layoffs and defaults, which of course ultimately has a domino effect on the economy and capital markets.

Everything discussed above helps explain why, last year, I reallocated all clients’ bond portfolios away from corporate bonds and towards Treasuries.

In addition to corporate debt, the U.S. government is running trillion deficits once again, which requires significant funding each year although I do believe Treasuries may benefit from a “flight to safety” as they’ve benefited in the past and even last year during periods of stock market stress.

Understanding these dynamics gives us insight into why the Federal Reserve may be so desperate to lower interest rates and inject liquidity into the system again even though, superficially, it appears the economy is healthy and the Fed should be in a tightening phase. The market, and the economy more broadly, has absolutely become addicted to cheap, easy money. That’s why the Fed cannot normalize monetary policy.

This is how the Federal Reserve creates unsustainable bubbles that must ultimately bust. Cheap money incentivizes very poor long-term economic decisions by individuals, businesses and governments that must ultimately be corrected/reversed. That correction/reversal can be a painful process as bad investments are liquidated and resources reallocated to viable projects. That process comes with short-term pain for long-term sustainability. We’ve had cheap money for over a decade. The United States has never in its history had rates suppressed so low for so long. Therefore, it follows that a lot of poor decisions have been made during this era of cheap money and those mistakes will likely get exposed as they have always tended to do throughout history after eras of artificially cheap money.