For those of you that follow Bitcoin, you know it’s had a volatile couple months. In early-June the price of a Bitcoin hit about $3,000 at which point many articles were written about how high it could go, etc… It then fell over $1,000 down to about $1,900. That’s a 35% drop in about 1 month (see chart below) before recovering once again. That is not the interesting part…. 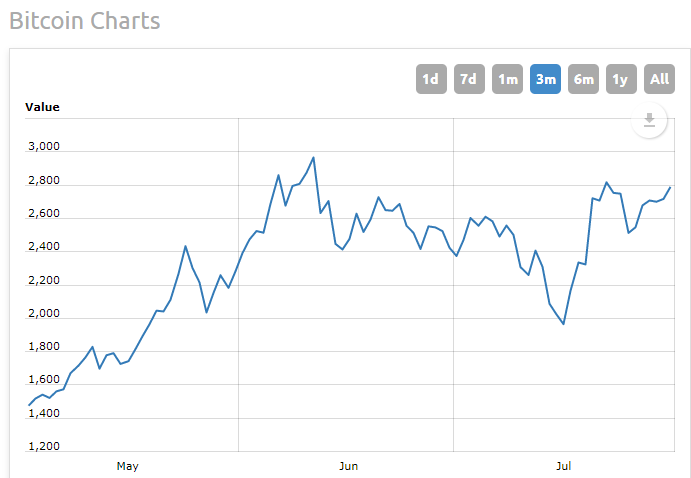 The interesting part about this is that around the time Bitcoin was peaking I received inquiries from four different people within the span of a couple weeks asking about my thoughts on Bitcoin and Ethereum (another cryptocurrency).

The point here is that most investors tend to want to buy something after it has performed extremely well. Either it simply jumps on their radar because the media starts covering it at that point or the investor has been watching from afar and becomes tired of missing out on the gains and hearing about all the money their friends are making.

In either case, when most, especially retail, investors want to jump into something they wouldn’t normally be interested in, it’s usually a bad omen for any asset. Typically, it’s a sign that the price may be topping out, at least temporarily. And wouldn’t you know it…around the same time I was receiving those inquiries Bitcoin began it’s 35% slide.

This is a great illustration of why I believe we’re often at a turning point when I hear a lot of investors asking for more stocks in their portfolio, or when they want to sell their stocks. Usually, retail investors want to add more stocks to their portfolio towards the end of the bull phase and want to sell their stocks at the depths of the bear phase (early-2009 is the perfect case-in-point). This is also why most investors should not be investing on their own without professional guidance.

It’s really just a numbers game. After all, the price of the market is based on supply and demand. So when the last few people cave and jump into the market the demand has been satisfied, which means there is no more / very little remaining demand to support that current price.