“I would not be surprised to see inflation peak at around the current 8.5% level and begin rolling over in the latter part of the year.” – Ken Melotte, June 2022

There has been a lot of focus on inflation and interest rates lately, understandably. But I’m not sure how well people generally understand the mechanics of what’s happening, why, implications, etc… so figured I’d briefly address it.

The Federal Reserve (“The Fed”) controls/influences a couple critically important things: (1) the price of money and (2) the quantity of money.

You might recognize the “price of money” by another name… “interest rates.”

An interest rate is essentially the price of money so it’s the most important price in an economy. After all, money accounts for half of most transactions (besides barter). Interest rates influence consumption, saving and investing behavior and impacts asset prices (homes, businesses, bonds, etc…).

Sidenote: It is strange to me that we have a system whereby a few people out of 330 million can dictate the price of money for the entire economy. I think it causes all sorts of distortions, malinvestments, inequity, and asset bubbles…but I digress.

Specifically, the Federal Reserve directly controls the Federal Funds Rate, which is the interest rate banks charge each other for overnight loans. Other interest rates can be influenced/impacted by changes in the Fed Funds rate.

Forbes clarifies the Fed Funds Rate (FFR) a bit for us:

“Here’s how it works: Customers deposit money at banks, and those deposits provide banks with the capital needed for extending loans and other forms of credit to their customers. Regulators require that banks and other depository institutions keep a certain percentage of their total capital in reserve, to help guarantee their stability and solvency.

The amount of capital held by banks fluctuates day to day as deposits are added and withdrawn, and loans are approved and repaid. This means their reserve requirements are also constantly changing.

Banks often need to borrow money from other financial institutions overnight to meet regulators’ reserve requirements—or they may end up with excess reserve capital to lend out to their peers. The federal funds rate provides a reference for institutions as they are borrowing or lending reserves.”

Below is a chart showing the Fed Funds Rate going back to the 1950s. We observe that the FFR is still relatively low by historical standards but much higher than it’s been for the vast majority of the last 15 years. 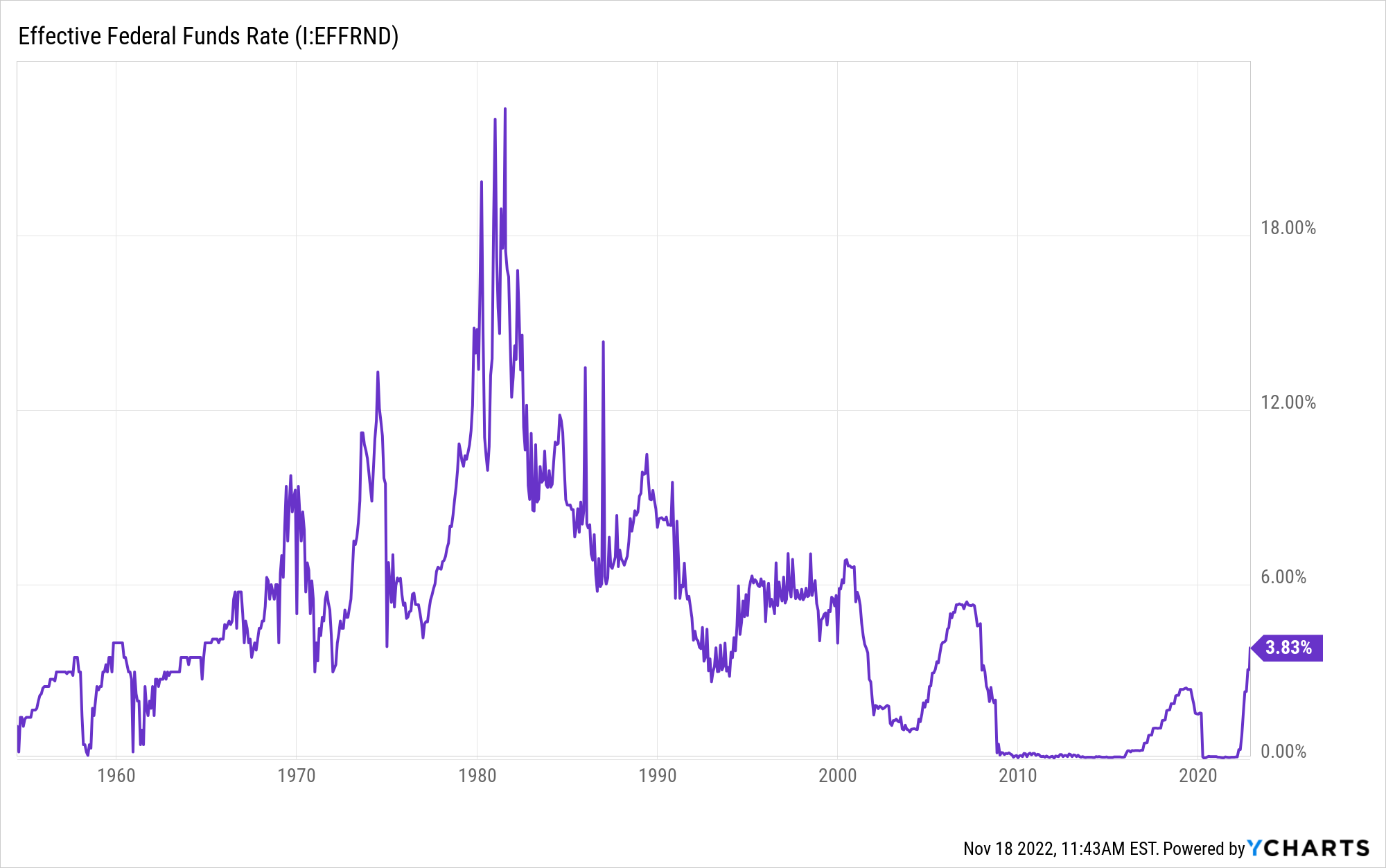 The Federal Reserve also controls/influences the quantity of money. It can essentially create money out of thin air as well as drain money from the system. It injects money into the economy by creating money (electronic) and using those newly-created dollars to buy assets (typically treasury bonds but other assets as well) from banks who bought the treasuries from the federal government when the government borrows to finance its expenditures. After all, the federal government runs perpetual deficits and so their debt continues to grow larger each year.

This is why we’ve seen the balance sheet of the Fed explode since early-2020. Specifically, total assets held by the Federal Reserve increased to about $9 trillion at its peak this summer from about $4 trillion on the eve of the COVID pandemic (image below) in an attempt to counteract the recessionary effects of COVID-response and monetize various government stimulus programs.

The Fed doesn’t control 100% of the money supply, but it does control a large chunk of it (banks also create money whenever they make a loan – broadly speaking). 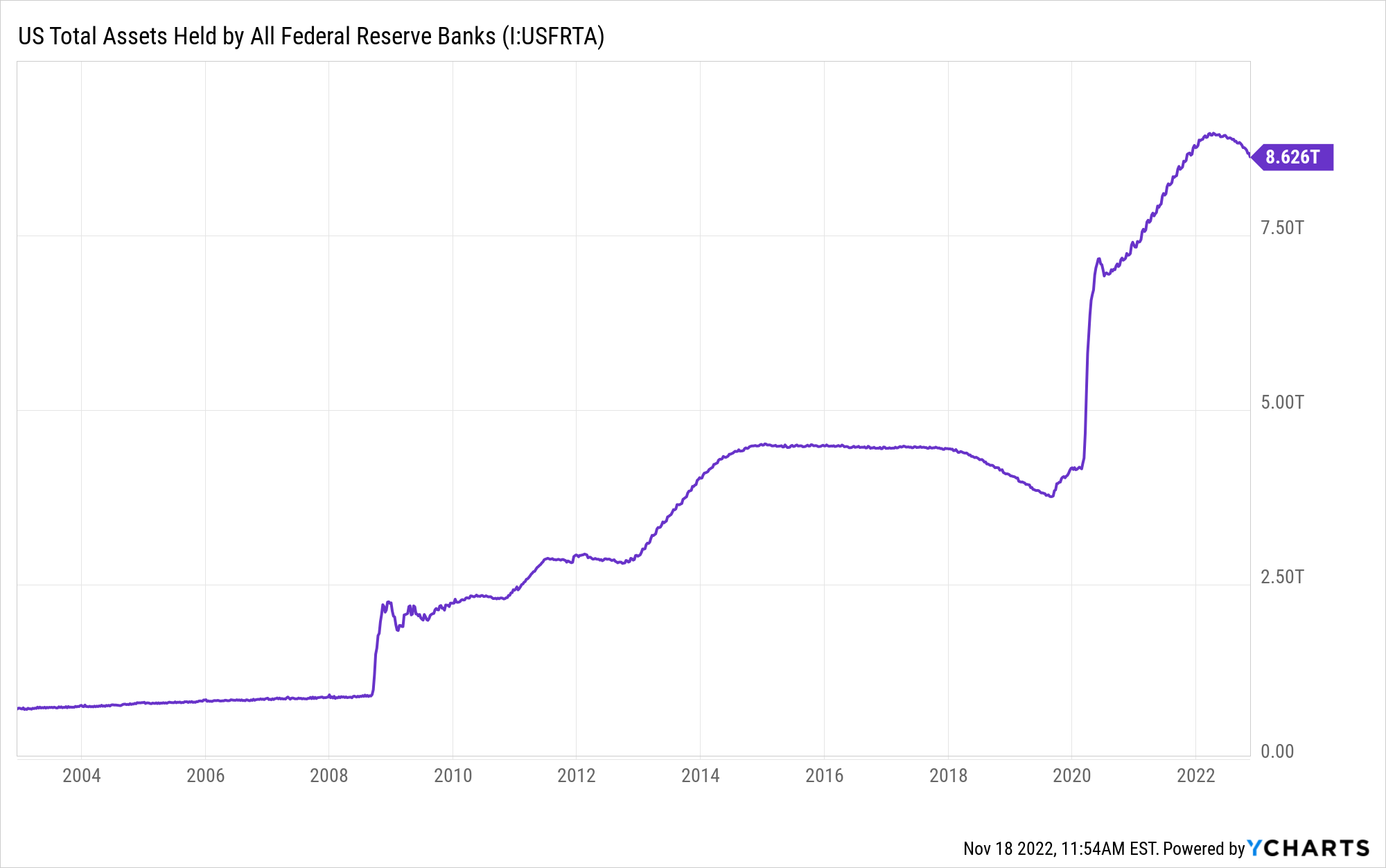 The Federal Reserve loosened monetary policy (also referred to as “easing”) by lowering interest rates and injecting money into the economy to counteract the economic disaster from COVID-response.

These actions incentivized (and funded) speculation (gambling) in everything from stocks to cryptocurrencies to real estate in 2020 and 2021. This is why asset prices rose so sharply even in the midst of a global pandemic characterized by a screeching halt in economic activity.

“I would not be surprised to see inflation peak at around the current 8.5% level and begin rolling over in the latter part of the year.” – June 2022

I believe that because the combination of the Fed raising interest rates, withdrawing money from the economy and supply chains being largely restored implies less money chasing more goods…the exact opposite situation of the prior two years that led to the current inflation problem.

We’ve already begun to see stock prices, home prices and used car prices decline in response. We’re also starting to see inflation roll over from its peak. Inflation is still high at almost 8% but it has started trending in the right direction (see below). 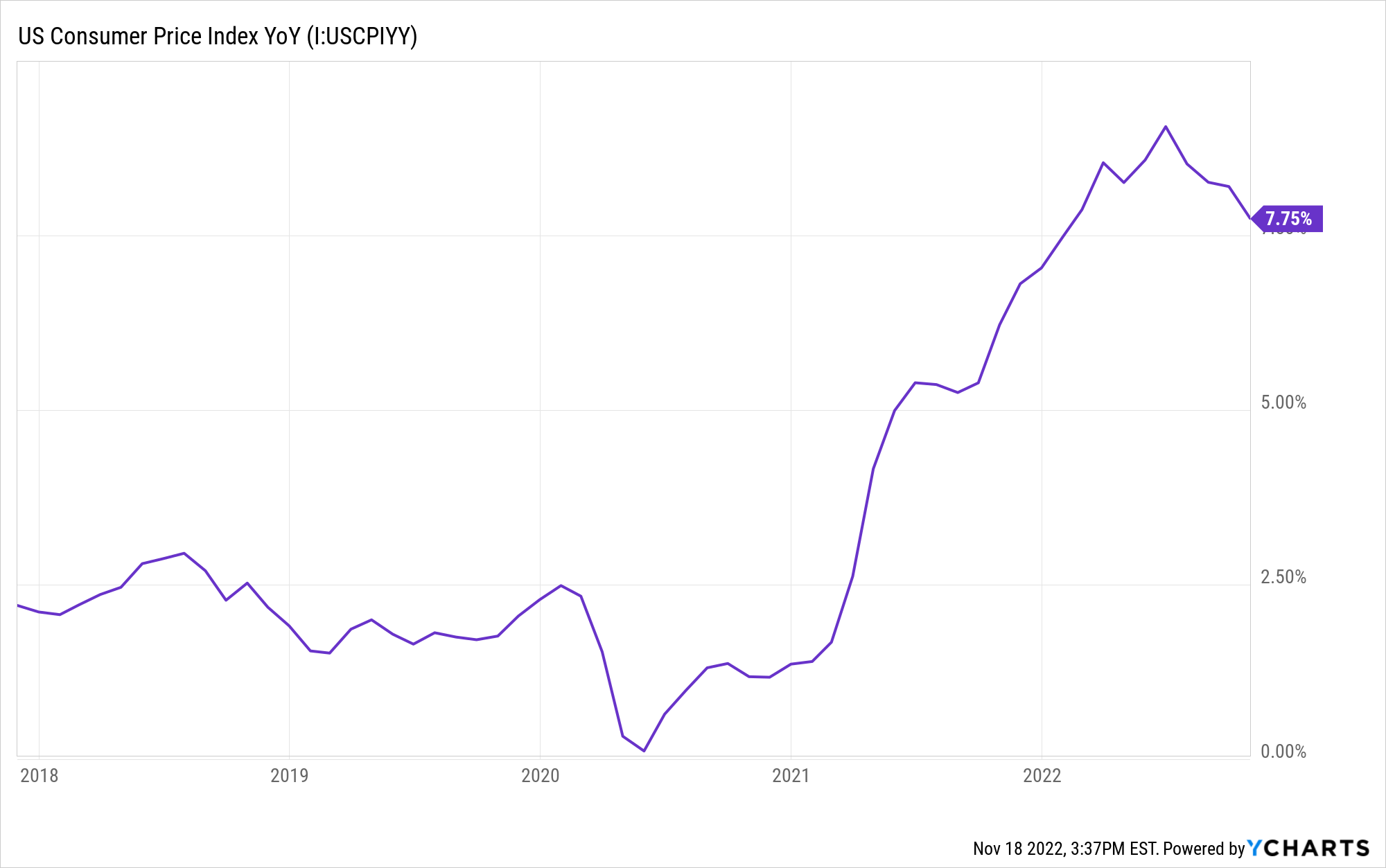