Last week the Federal Reserve announced it would cut interest rates by 0.25%. This is major news because it signals the end of the “tightening” cycle and is the first rate cut since the Great Recession fallout. I wrote about the stock market’s action during rate cutting cycles a few weeks back here. 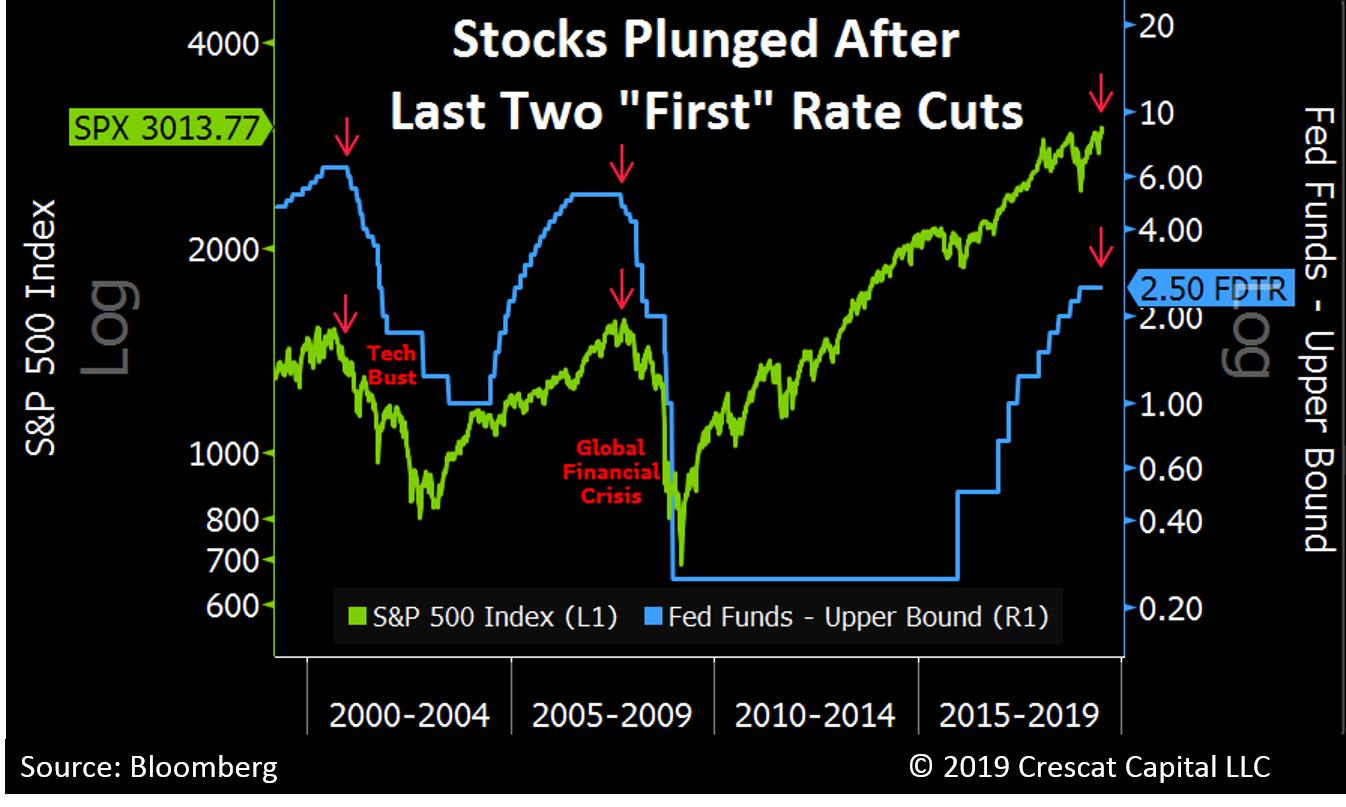 I’ve long said, even when the Fed first embarked on this easing cycle a decade ago, that the Fed would never be able to “normalize” policy before they felt the need to ease again. Well, sure enough, last week’s announcement confirms that prediction.

Why have I long believed that to be the case?

Because I believe monetary “stimulus” from the Fed is nothing more than a “painkiller” often confused with the “cure.” When a patient is sick from a fatal disease, like cancer, they need more than a painkiller…they need a cure! The U.S. economy has been sick with a debt disease for which the cure is less borrowing, less spending and more saving.

This is exactly what’s happened since the lows of 2009. Absent Fed intervention during the Financial Crisis, the U.S. likely would have had an even more painful collapse in the short-term but would also have had eradicated much of our debt during the crisis, benefited from falling prices (a positive development for anyone losing their jobs/income contrary to what most economists tell us), and the economy would have come out the other side of the crisis much healthier and would have grown much more rapidly ever since.

We could have had a far more robust economy over the last decade if policymakers would have simply allowed the economy to go through the healing process and suffer the debt withdrawal symptoms.

Instead, the intervention/artificial propping up of the economy (and the debt burden) has simply led to economic stagnation/anemic growth, debt at stratospheric levels, zombie companies that are barely surviving and wasting resources, etc..

That’s why GDP growth has averaged only 2% since the Great Recession even with all the unprecedented stimulus that was thrown at the economy. The stimulus didn’t solve anything. It simply propped up the massive debt overhang that’s acting like an anchor on the U.S. economy. The Fed never cured the disease (or allowed the patient to heal) but merely injected a painkiller to temporary relieve the pain while allowing the patient to get sicker.

This, in turn, causes the Fed to prescribe even more painkillers for the U.S. economy (i.e. last week’s announcement) as the economy fails to heal or achieve its potential.

The U.S. economy desperately needs to take the bitter medicine and go through the painful, albeit necessary, debt deleveraging process. Kicking the can only makes that inevitable process more painful.

I fear many folks are far too complacent and have far too much risk embedded in their portfolios either because they (and their advisors) don’t realize what’s going on or they simply don’t know what steps to take next. I believe many folks (and their advisors) may be jeopardizing their most important financial goals. When this market turns it will go quickly making it difficult to respond in time.

Let me help you,
Ken