Since I generally don’t make recommendations on individual stocks for clients, I don’t focus my commentaries on them. However, I’ve been following this company closely for a couple years now, and the situation has become so ludicrous that I feel the need to highlight it. This could be one of those rare examples that go down in history as a great learning lesson.

Let’s look at the charts of a few other manias from the last twenty years: 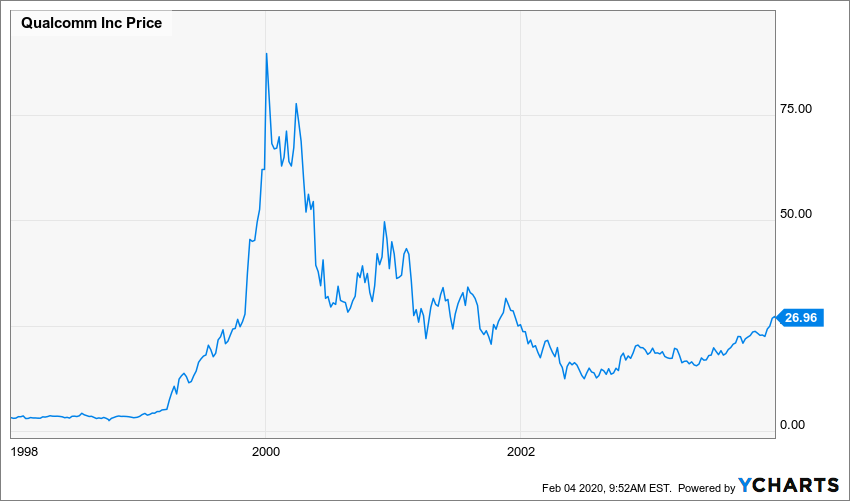 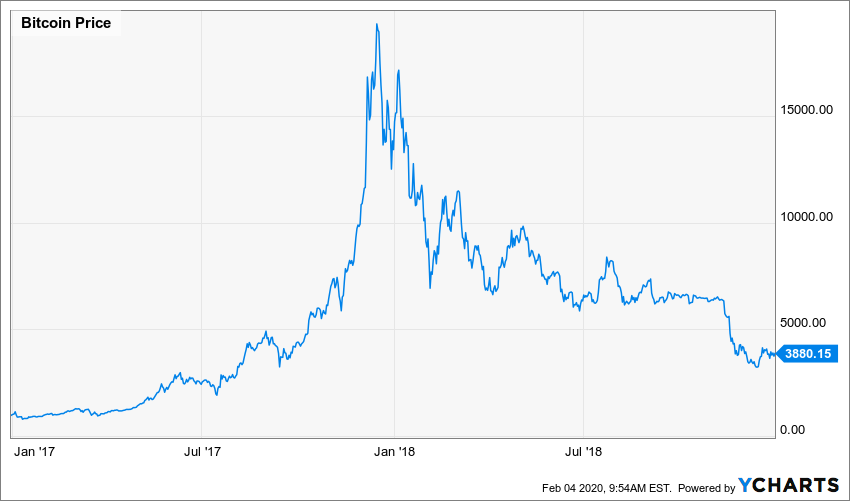 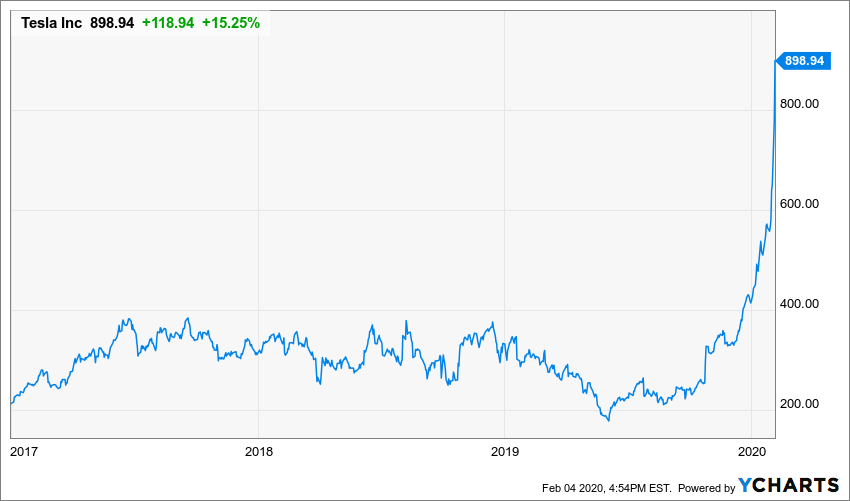 Before I continue, I should note I think the Tesla Model S is an impressive vehicle. I have clients, friends and family who have (or had) this car. I’ve ridden in various Model S’ and driven one, and it is undoubtedly a thrill. The speed, the technology, etc… it’s simply a completely different driving experience than anything else…in a very good way.

The folks I know who own these haven’t had any issues with them and absolutely love them with an almost cult-like fervor. If you get excited about fast acceleration (as I do) than you have to love a car that can go from 0 to 60 mph in 2.6 seconds and costs around $100,000.

The Model 3, on the other hand, appears to be a slightly different story. There appear to be many documented cases floating around the internet of quality, workmanship and warranty issues on the Model 3s. Having said that, however, I also know a couple people who own the Model 3, and they, too, love their cars and do not appear to have experienced the quality issues I’ve seen documented.

The market capitalization of Tesla’s stock, at the moment of this writing, is about $160 billion. To put that in perspective, the combined market cap of Ford, GM and Chrysler is just $106 billion! 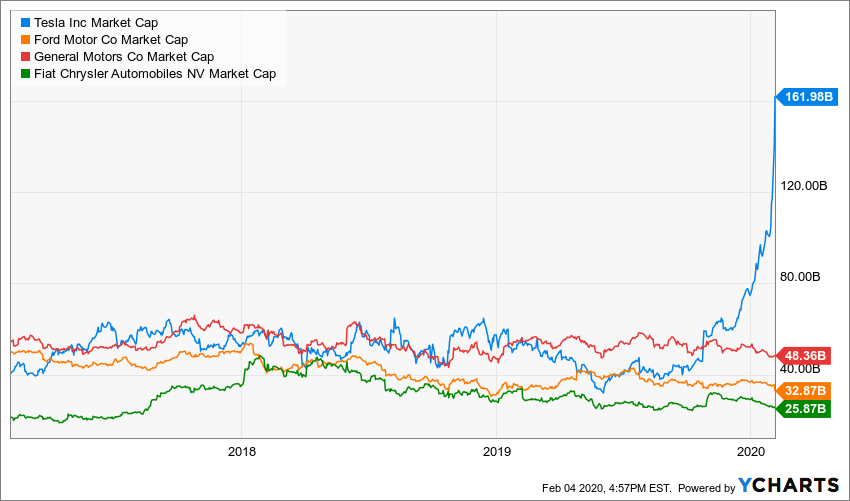 This makes Tesla the second most valuable automaker in the world behind Toyota and surpassing Volkswagen.

Let’s put this all in perspective for a moment.

Tesla’s market cap is about 50% larger than that of Ford, GM and Chrysler combined. Meanwhile, Tesla’s 2019 revenues were just $25 billion compared to $425 billion combined for the other three! In other words, Tesla enjoys a 1.5x market cap with just 1/17th of the revenue!

Furthermore, Tesla’s never made a profit in sixteen years while the other three are profitable automakers.

And, finally, the other three sold about 17 million cars worldwide last year combined while Tesla sold 370 thousand, or just 1/46th!

Because Tesla is a luxury automaker let’s compare to BMW briefly. In this case, Tesla’s market cap is about 3.6x greater than BMW with just about 1/5th the revenues and 1/7th the vehicle sales. And, again, BMW is a profitable automaker whereas Tesla is still seeking its first profitable year in sixteen. Maybe the seventeenth year is a charm.

The question I’m attempting to answer in this commentary is, “Is Tesla’s current stock price and meteoric rise justified? Is Tesla a good investment at ~$900/share or at even half that price?”

However, the revenue and net income figures aren’t nearly as impressive…

There appears to be a flattening of revenues after the initial pop from the Model 3 release. Yes, true, many companies would be thrilled with 14.4% top-line growth, but, remember, the stock is priced for sustained EXTREME growth. Furthermore, it’s not the absolute growth rate but the trajectory of the growth rate that is unsettling.

Tesla sold 50% more vehicles in 2019 than in 2018 but experienced only a 14.4% growth in revenue in 2019 from 2018. Tesla is selling more cars but of the cheaper models so the average sales price continues to decline. The problem is that it does not appear Tesla is able to make a profit on those cheaper models.

The story appears even starker when we compare quarterly revenue. Revenue in fourth quarter of 2019 increased only 2.1% year-over-year (below). And that poor result occurred even as Tesla entered new geographic regions around the world.

Tesla also experienced a stall in sales within their biggest market – the United States.

One must wonder if the market has been saturated or if competitors’ electric vehicles are finally starting to put a dent in Tesla’s growth?

Also, the federal tax credit for buying Teslas in the U.S. was reduced last year and is now completely phased out as of January 1st of this year. Meanwhile, competitors’ EVs still benefit from a $7,500 federal tax credit.

And, finally, Tesla lost $862 million last year, which brings cumulative losses since going public in 2010 to about $6.5 billion. In fact, Tesla has lost money in every year of its 16-year existence.

Tesla experienced a 26.6% decline in net income in the fourth quarter of 2019 from the third quarter even with greater vehicle sales and over 17% higher revenues!

Here are more metrics compared between Tesla and two luxury automakers, BMW and Mercedes. All figures in this chart, except Market Cap, are as of the third quarter of 2019. By the way, Tesla’s price/sales today stands at about 8x as opposed to the 2.85x listed below…an unheard of multiple for an automaker!

A Brief Note on Capital Expenditures

Capital Expenditures, or CapEx for short, is money spent by a company to acquire, improve and replace new/worn-out property, plants and equipment.

As you might guess in a manufacturing-intensive industry such as making automobiles, CapEx can (and should) be significant. It’s a capital-intensive industry. This would be further magnified for a young, small, fast-growing company like Tesla that is supposedly researching and developing new models constantly and expanding productive capacity (e.g. building new assembly lines and entire factories) at a high rate to support lofty growth expectations.

In this chart from Bloomberg we notice Tesla’s CapEx peaked in 2017 and has been declining ever since. We also notice that in 2019 CapEx didn’t even keep up with depreciation & amortization! In other words, their long-term assets are wearing out faster than they can maintain/replace them! 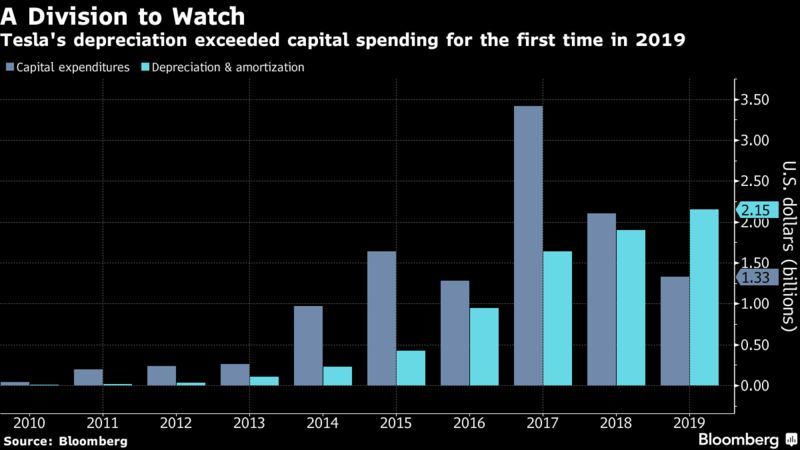 How are they supposed to be researching and developing new automobile models when their CapEx isn’t even sufficient to maintain their existing assets? Imagine the new tooling that is required to begin manufacturing all the new automobiles they’ve promised (e.g. Semi, Model Y, Roadster 2, Cybertruck). This recent trend in CapEx is not at all consistent with a high-growth automaker but more consistent with an automaker trying to preserve cash.

The average CapEx to Depreciation & Amortization ratio for the industry is 187% based on this analysis from NYU. Tesla originally guided for about $2.5 billion in CapEx in 2019. The actual amount was about half that at $1.33 billion.

First, it is impossible to know where the stock price will top out! Neither I, nor anyone, can know this until it’s already in the rearview mirror. Tesla could have topped out today or could go to $2,000. Heck, there are even analysts predicting a $7,000 price target!

On almost any relevant metric  it appears Tesla is extremely overvalued. The amount of growth required to justify the valuations are unbelievable.

I believe this could be one of those rare cases of a mania where the price goes up parabolically while being absolutely disconnected from fundamentals, peaks at some unknown value and then crashes back down to reality with a lot of volatility along the way.

Of course, when that happens there is no telling how high the price goes. Although, Carl Quintanilla (CNBC anchor), quoted Peter Boockvar after the close this afternoon (with Tesla’s 7-day RSI at a blistering 97), “I don’t believe I’ve ever seen any stock get this high in its RSI. I looked at Qualcomm in 1999 and the highest its RSI got then was 90 as it went parabolic. I have zero position and am just an amazed spectator in this name ..”

This analysis today is performed at a “10,000 foot level” and doesn’t address the struggling solar business, allegations of self-dealing in the SolarCity acquisition, allegations of “questionable” accounting practices, failed promises from the company on cost and performance of both vehicles and solar panels as well as timing of new models, unrealistic Robotaxi/autonomy promises last year that have recently been walked back but upon which capital was raised, Elon’s own admittance that Tesla has been on the brink of insolvency multiple times, issues with vehicle service (both costs of repairs and timeliness), a revolving door of executive hires and departures, dependency on subsidies and regulatory credits for survival, etc… This was purely a review of a few important line items as reported by Tesla taken at face value.

I didn’t go into details on competitors’ EV products or the prospects for profitability of EVs in general (see McKinsey’s report here).

Additionally, the growth in demand for EV vehicles also appears to be leveling out. Global EV sales were essentially flat in 2019 compared to 2018 while we saw dramatic increases in previous years. Is that a demand issue or was it a supply constraint? And, finally, Tesla has to contend with the fact that global vehicle sales are also struggling (see below) so it’s quite possible automakers in general are going to have a rough go of it over the next five years. 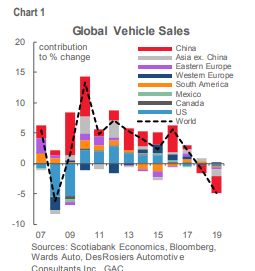 I currently own a small amount of put options on Tesla and will likely buy more at some point. However, they are very expensive right now as it appears many others have the same idea. I also own put options on Ford. These naked puts have very low probability of paying off.

This commentary is not intended as investment advice but as education. Past performance is no guarantee of future performance. All investments bear the risk of loss.